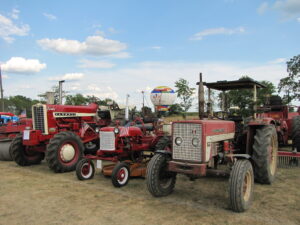 Surrounded by corn and bean fields approximately 11 miles east of Rantoul, Ill. lies the quiet community of Penfield. Situated on the eastern edge of town is the former Penfield Grade School. It’s been more than two decades since students attended the school, but the school is still being used to provide a history lesson to those who enter its classrooms.

It all started with the formation of the I & I Antique Tractor and Gas Engine Club in 1976. The club of approximately fifty members restored antique tractors and engines. Their common interest grew into something much bigger than anyone imagined. According to Darius Harms, one of the original club members, “We wanted to preserve the heritage of the pre-modern farm. We didn’t want to forget how we got to where we are today.”

In the early days the club members would exhibit their antique tractors at local fairs and shopping malls. In 1987 the club held its first Historic Farm Days at the Middle Fork Forest Preserve five miles north of Penfield. After nine successful years the event outgrew its space and moved to the property the club bought in 1996 on the outskirts of Penfield.

Over the years, the I & I Club accumulated farm hand tools, household furnishings, appliances and several pieces of horse and tractor drawn equipment. Many items belonged to the members, some were loaned or donated. Everyone agreed the equipment and appliances should be on display for the public to see. In 2003, through the hard work of volunteer members, the Penfield Grade School was converted into a museum. 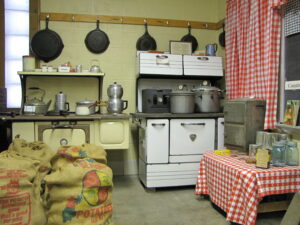 Housed within the classrooms and gymnasium is one of the best collections of antique farm machinery in the Midwest. The Ladies Household Exhibit occupies two classrooms. On display are kitchen appliances, utensils, furniture and staples that would have been part of any household during the 1920’s. In one classroom is the re-creation of an International Harvester parts department. Another classroom displays a variety of old seed corn sacks, ears of corn and several different corn planters. Two upstairs classrooms house several more unique appliances and equipment. 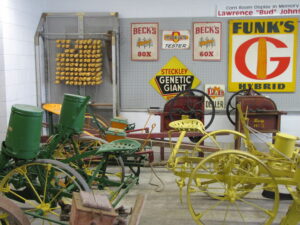 The larger equipment is exhibited in the gym, including corn shellers, grain drills, disks, plows and threshing machines. On loan from the Smithsonian National Museum of American History is the world’s oldest operating gas engine tractor, the 1903 Hart-Parr No. 3. This was the third tractor built by Hart-Parr. Eventually Hart-Parr became part of the Oliver Tractor Company.

Annually, during the second week of July, the Historic Farm Days attracts thousands of visitors to the little community of Penfield to see the displays and working demonstrations. In late August, when the Farm Progress Show is held in Illinois, more than 100,000 people attend the Half Century of Progress at the former Chanute Air Force Base on the south end of Rantoul. All of this is a result of the efforts of the I & I Club and its sponsors.

A tremendous amount of work goes into preparing and holding these events. No one is paid; everyone volunteers. Some plan their vacations so they can help during the events. According to John Fredricksen, the current President of the club, “What has made the I & I Club successful is the passion the members have for keeping the memories of a day gone by and the friendships that have developed over the years. Everyone looks forward to getting together.”

At the end of the season, when the events are done, many of the members gather together with their friends over a potluck dinner to share stories and celebrate the results of their efforts.

Today the club has almost 500 members from several states. A membership in the club is only $25 per year. The Ladies Auxiliary sells a cookbook for $10. As a result of the efforts of the I & I Tractor Club, the museum will no longer be, according to club member Dean Blackford, ”The best kept secret in east central Illinois.” More information can be found on its website at: www.antiquefarm.org.