In a town with many restaurants to choose from, Destihl Restaurant & Brew Works has become a standout—and not just for its award-winning beer.

According to General Manager Christopher Gee, the creative amalgamation of food and beer is what makes the place unique. “There are other small breweries that have popped up around town, but none of them incorporate the food as much as we do. … They focus more on the beer, where we really focus a lot on the culinary piece. We incorporate a lot of the beer into the food in ways that others might not.”

Even the name Destihl is by design. CEO and Brew Master Matt Potts wanted a name that didn’t give patrons any preconceived notions of what they were going to encounter, says Gee, who describes the Destihl experience as “a white linen level of service in a more comfortable environment.”

According to the restaurant’s website, they do not subscribe to any one cooking genre or style of beer. “We have the chefs creating food items, we have the bartenders creating drinks—then we’ll balance them a little bit and present them to the corporate team and decide what we like and what we want to put on the menu,” Gee explains. 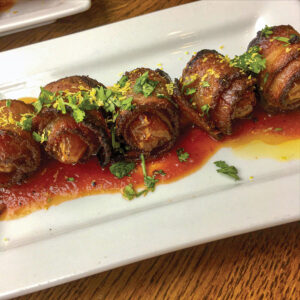 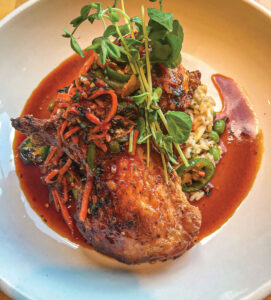 Gee makes special note of the Thai fried chicken (lemon-herb-Weissenheimer Hefeweizen brined and fried half chicken, coconut and scallion rice, jalapeno, edamame, ginger, lemongrass, carrots and basil with a sweet chili vinaigrette) and the stuffed poblano peppers with white cheddar cheese, mashed potatoes, cumin, cilantro, chile and basil oils, roasted red pepper sauce, ancho rice and beans. “We would have riots if we tried to take it off the menu,” he says.

It is easy to see their motto—“boycott bland, support flavor”—extends to the menu as well as the beer.

The gastrobrewpub serves popular styles that have won awards at industry events and competitions. Also on their beer list are seasonal brews, like the popular Dosvidanya, a Russian Imperial Stout. 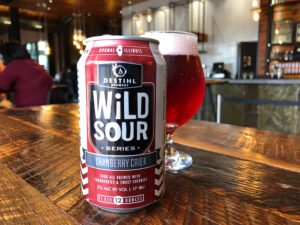 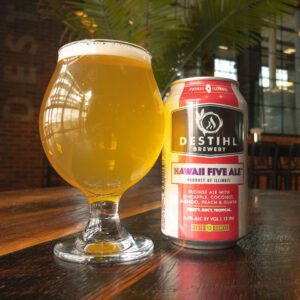 “The strawberry blonde we bring back every year around Mother’s Day—it’s a lighter, fruitier beer for us. Our Wild Sour series is phenomenal. … Basically, because of all the flora and fauna in central Illinois, there’s a lot of bacteria that floats through the air. A lot of brewers were having trouble because it was souring their beer. We found a way to enhance that and use it to our advantage. There are sours that couldn’t be made anywhere but central Illinois because of [that] bacteria.”

According to Gee, their sours are popular across the map. He says many people who have moved on to new locations get excited when they see the Destihl brand outside of Illinois. “I was visiting some friends in Michigan and we went to a bar; [we] were talking to the bartender, and they had one of our beers on [tap], so he brought me some to try because he was excited I knew what Destihl was. People up there have never heard of Normal, Ill.”

Gee gives a brief rundown of the brewing process. He says it begins with creating what is called the wort with grains and other ingredients. They spin the wort so unwanted particles are filtered out. After that 8-hour process, the beer goes to a conditioning tank for seven to 14 days, depending on the type of beer it is.

Destihl offers eight of their beers fresh from the tank and eight from others they keep in kegs.

Potts, a lawyer, received a home-brew kit as a gift from his wife. He fell in love with brewing and went back to school and got a degree as a master brewer so he could further pursue his passion.

Gee says when developers decided to build a hotel in Normal’s Shoppes at College Hills, they approached Potts about opening a restaurant. With that, the original Destihl Restaurant & Brew Works became a reality.

“We just celebrated our 12th year anniversary here,” he says. “We opened in Champaign in 2011.” He adds that the downtown Champaign location is currently in the process of being rebuilt in the up-and-coming Carle at the Fields development.

Demand for their beer grew, and the need for a new brewery became clear. They expanded from brewing beer to simply serve in their restaurants to leasing space in a warehouse so they could make larger amounts for distribution.

Now Destihl distributes to 38 states and five countries—in order to keep up with that demand they needed a new warehouse location. It was then they built the new brewery, choosing to add a beer hall as well.

“Both the brewpubs still brew the beer they serve, so what we have on draft we make here in the building. But there are some things we just don’t have room to can or bottle here, so the cans and bottles we bring in come from the beer hall,” says Gee. 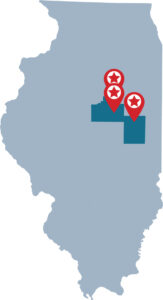