As you take a bite of Salsa Rose, you may notice the signature flavors of Reinneck Ranch’s products – a little sweet with a little heat. But it’s not just a salsa. Its backstory has highs and lows, and it all begins with the birth of the salsa’s namesake, Jada Rose.

Born premature on Aug. 2, 2008 at 28 weeks, Jada Rose weighed 3 pounds, 5 ounces. During the first several months of her life, she spent most of her time in an isolette, an apparatus used to maintain environmental conditions.

“Her arm was as long as my index finger,” remembers Jada’s father, James Reinneck. “And she had this strange-looking tube that went in through her belly.” That’s how she was fed, milliliters at a time.

“All we could do was sit there and watch her grow,” says Jada’s mother, Hope. “That’s what we were doing all day.” When they could hold her, it was only for short periods of time.

At the end of the day, all the babies in the NICU (neonatal intensive care unit) were weighed, and when any baby would gain even an ounce, it was a big deal.

“There were two days that Jada didn’t gain weight, and we were totally freaking out,” James says. “Everything stops. … You don’t realize what people go through unless you experience that. It is everything but normal, that’s for sure.”

“It is a very perspective-changing experience,” Hope agrees. “You make a lot of promises to yourself when you’re there. You’re there all day long, and all you can do is pray and watch her grow.” 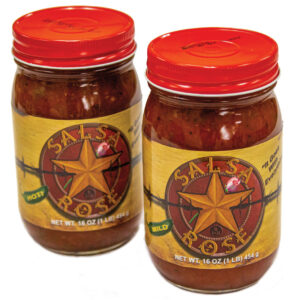 Jada spent a total of 52 days in the NICU. During that time, James would go home to make salsa to relieve some stress, and he would bring it back for the nurses.

“If you had a child in the NICU, the nurses became your new best friends,” Hope says. “The nurses were just amazed [with the salsa] and would say, ‘Oh Mr. Reinneck, I think you should try to get this on the shelf in the grocery store.’ We remember looking at each other and thinking, ‘Wow, this is amazing.’ I really feel it fueled a fire for a dream God put in his heart a long time ago.”

As the weeks went by, Jada grew little by little, and the Reinnecks would watch her and talk about their dream. “We decided to name it Salsa Rose, because we feel like it got its birth there, just like Jada Rose,” Hope explains.

They remember crying when it was time to go home at night, their only consolation that Jada was being well taken care of by the doctors and nurses at the hospital.

“The day she came home … you’d think that would be the best day, but I can tell you what happened. When I got in the car, I was scared to death,” Hope says. “I remember that feeling of, ‘God, please … I’m going to need more help than I ever thought I’d need.’ An hour ago, 15 people were taking care of her. … Then they just send you home. I was a nervous wreck.”

When Jada came home, she was still small and weighed only 5 lbs. “I hawkeyed her,” Hope remembers. “I didn’t want anybody around her, and I definitely didn’t want her around anything that could [harm her] … I think praying was the only thing that calmed that fear.”

That’s the advice Hope has for other parents going through a similar situation. “My one advice for sure is to become praying parents,” she says. “That’s the only way I saw myself out of that tunnel.”

“Get surrounded by positive, supportive people,” James adds. “Surround yourself with a good circle of people who understand what you’re dealing with.”

In November that year, just weeks after they brought Jada home, James suffered a heart attack and spent three months in rehab. “It was almost like a miracle to make it through all of that, each one of us,” James says. “We all got a second opportunity the same year.”

After coming home from the hospital, he and Hope wrote down three things on a Post-it Note that they wanted to do in their lives. One of the things on that note, which he still has today, was to put Salsa Rose on the market.

In a twist of fate, a few years later in 2011, James got a little extra push to pursue his dream – the company he worked for downsized and he lost his job.

“We decided to use that as a window instead of a setback,” Hope says. “I said, ‘This is a perfect time for you to get that on the market.’” She then scribbled down her idea for a logo that would later come to life on all jars of Salsa Rose. 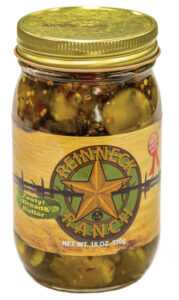 James does the recipe work for Reinneck Ranch’s products, and he loves to cook. “I always experiment [with food], and I make what I really like,” he says. “If I have a passion for that – my salsa, my pickles – it is easy for me to sell because I love it so much. Now I get to see people enjoy them.”

While it wasn’t on purpose, most of Reinneck Ranch’s products started off in competitions before going into production and have won many awards over the years. “I get beat up, but I still love it,” James says. “It has been very rewarding.”

“I’ve been making salsa for 40 years now, and pickles even longer than that,” James says. “I like to see how good my products are, and that just confirms it.”

Early on, the Reinnecks got involved with the Illinois Department of Agriculture and became a part of the Illinois Products program. “We are very committed to the state of Illinois as far as getting our products produced locally,” James says.

By the time Salsa Rose made it to stores, James estimates he had given 1,000 jars away and knew he had a good product. It started in five stores and steadily grew over the next several years to the point that in 2015, Hope left her job at a bank to join her husband at Reinneck Ranch full time.

“I thought it was time for me to help, so I left my career,” Hope says. She debated and prayed about what she should do. Then one day while driving, her now 8-year-old son Levi spotted a semi-truck with red on the front and asked if it was a Salsa Rose truck. She replied, “No, but it can be.”

“That’s when I decided my answer,” she says. “Don’t be afraid to let go of something. Our pastor says you can’t get anything else in your hands if you’re holding on to what you’ve got so tight. You’ve got to be willing to let that go and have your hands open.”

Today, Salsa Rose and other Reinneck Ranch products can be found in approximately 400 stores in 13 states. Jada is now 11 years old and, according to Hope, loves having a salsa named after her. She’s the “star of the show. … She’s all about it.” While kids at school may call him “salsa boy,” Levi will soon have a product named after him too.

“When Levi came, we got to experience both worlds,” Hope says. “He was 7 pounds, 1 ounce [and] he was right on time, raring to go, healthy and strong right from the git-go.”

While it’s not currently available, the Reinnecks will have a chili on the market called Levi Rugged Chili because “that perfectly describes him.” It is a product that contains meat with their signature sweet with a bit of heat. 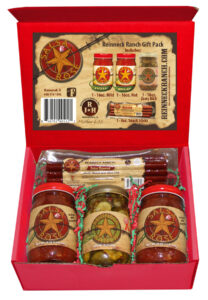 The Reinnecks currently have around 15 products on the market, which include salsas, pickles, meat products and gift sets. The meats include salsa-flavored snack sticks, jerky and bratwursts. Reinneck Ranch partners with Wenneman Meat Co., in St. Libory, Ill. for the brats.

Reinneck Ranch, a member of Clinton County Electric Cooperative, is truly a family business, and the kids have learned by watching and listening. They go to stores, talk with customers, straighten the displays and help package gift sets.

“We don’t talk too privately about any of it. We do shield some of it … but they pretty much know,” Hope says. “It’s a standard thing we’re talking about at the dinner table.”

Last fall, James was working on an account, when, out of the blue, Levi asked how the account was going. “I said, man, I’m working on it,” he laughs.

The Reinnecks keep busy going to stores, meeting customers and doing demos. “I know I’ve done thousands of demos,” James says. “Instead of sticking [the products] in an advertisement, we go out there. You want to find out how good your stuff is? Have people try it. They’ll tell you quick. … I’ll be somewhere, and someone will say,
‘I just came in for the salsa.’”

“People will tell us these heartfelt stories about something they’re passionate about doing,” Hope says. “I always say to just keep going. The road is going to be rocky, but you’ve got to keep going. Keep your eye on the goal. It is going to be worth it.”

Salsa Rose has been shipped all over the U.S., including California and Alaska, and has been sent to soldiers in Iraq and Afghanistan. “We are thankful we get to see people enjoy something that we are part of creating,” Hope says. “That is the blessing for us.”

While the Reinnecks hope Salsa Rose will be in stores nationwide someday, that’s not something they are actively working toward. “We are really doing this for our kids,” Hope says. “And we’re going to keep doing it for as long as we can.”

“I don’t see the end in sight because we’re not working to an end,” James adds. “We’re out working hard and making a living to provide for our family. … I just want people to enjoy our products. I would love everybody to try it.”

Go to ReinneckRanch.com to learn more about Reinneck Ranch products, for a store locator and for recipes.