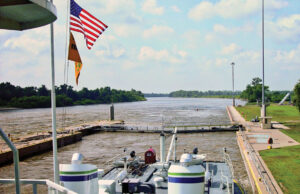 The Water Infrastructure Now Public-Private Partnership Act would create a pilot program to explore agreements between the Army Corps of Engineers and private ­entities as alter­natives to traditional financing, ­planning, design and ­construction models. The Army Corps of Engineers estimates a $60 billion backlog of ­outstanding projects that will take decades to complete without outside investment.

“Over five years ago, I worked with my colleagues to authorize a program to ensure safer, more reliable and more efficient navigation along the Mississippi and Illinois Rivers by expanding and modernizing the locks and dams,” said Durbin. “Unfortunately, the first benefits of this ­modernization won’t be felt until 2047 – and that was the prediction before ­sequestration. It’s clear we need a new model – one that speeds up the process of planning and constructing projects and brings to the table greater private investment.”

“The Illinois and Mississippi rivers are the lifeblood of the Midwest’s economic engine,” said Senator Kirk. “At a time when the Army Corps of Engineers is ­facing severe funding shortfalls and a growing backlog of ­authorized projects, we need to explore new ways to bring ­private ­support to our public assets. This legis­lation allows important lock and dam and flood control ­projects the opportunity to engage in a public-private ­agreement for project ­management, keeping costs down and speeding construction.”