Built on pride and patriotism 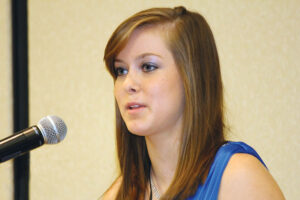 Sarah Locke represented Shelby Electric Cooperative on the 2013 Youth to Washington trip, sponsored by the Illinois electric and telephone cooperatives. She was also elected by her peers to represent Illinois on the NRECA Youth Leadership Council. At the Association of Illinois Electric Cooperatives annual meeting in August, Locke told the co-op leaders what the trip meant to her.

“I’m French, and that day we all felt like American citizens.” As I read this anonymous quote, goose bumps crept over my skin. The longer I stared at the words, the more they sank in. I fumbled for my camera before the words faded off the wall and the slideshow transitioned to another quote. Little did I know, I didn’t need a picture, a month later the words still have not faded out of my memory. This took place when I was standing in the 9/11 portion of the Newseum. I realized that other countries really do care about us. It gave me a sense of patriotism for being an American. And what better place to feel patriotism than in our nation’s capital of Washington D.C!

USDA projects median farm will lose $2,300 in 2013
More senior co-op members using social media
Galena, Illinois named as one of the friendliest...
How to communicate with your family during a...
Illinois coal exports set record in 2012; now in...
Hitzhusens Win 2013 Governor’s Conservation Farm...
Illinois utilities cooperate on State Fair Energy...