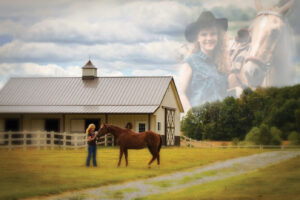 A day doesn’t go by that Denice Kinney doesn’t think about her sister, Julie, who passed away in 1999 after a battle with cancer. Kinney is an employee of Wayne-White Counties Electric Cooperative in Fairfield where she works in the records department. Denice and Julie shared a special bond as horse lovers as well as sisters. Kinney still owns the horse, Cisco, that Julie entrusted to her before she passed away.

A story and photo contest about horses was recently conducted by Horse & Rider Magazine, a national publication that is read by many horse enthusiasts. The magazine asked readers to submit stories about how their horses had made positive differences in their lives. Kinney felt that this would be an opportunity to share her inspirational story and her sister’s memory with the readers of the popular magazine. “Winning a prize would be nice,” was Kinney’s thought as she entered, “but I really just wanted to share the memory of Julie and her love of horses with others so that they could understand how Cisco (her horse) has made such a lasting impact on me.”

There were over 700 stories and photos submitted nationwide for the contest and Kinney’s entry was chosen as the Grand Prize winner. Contest rules called for entries to limit their story submission to 250 words. “There is so much to say about my relationship with Julie and Cisco,” said Kinney. “Narrowing it down to 250 words was probably the hardest thing to do.” Her brother, Ron Hallam, took a professional photo of Denice and Cisco that had Julie superimposed in the background. The photo (seen above) was submitted along with the following brief story to complete her entry:

Cisco is a horse that has been a best friend to me since my sister, Julie, passed away from cancer at the age of 20 in 1999. As sisters, we shared so much together including our passion for horses. We even shared the same birthday, although I am 12 years older than her. When Julie was diagnosed, I was overwhelmed with emotion. During one of my last visits with her in the hospital, our eyes met with an understanding that only sisters can have. She knew her time was near and she said softly to me, “Please take care of Cisco, and if he ever gets in pain that can’t be controlled, please put him down.” We buried Julie a month later. That was 12 years ago, and Cisco is now 28. I count it a blessing to own him because when I spend time with Cisco, I feel the presence of my sister and the memories never fade.

At first, I couldn’t bring myself to ride again. I would often just sit in the pasture and watch the horses. Cisco would come up and just stand next to me, as I cried, and he would nibble on my shoulder as if he understood, and to say everything will be OK. Cisco has done more for me than any grief counselor ever could. I love this horse because he gives me peace and comfort. There isn’t a day that goes by that I don’t think of Julie and our special bond.

It’s important to note that the life expectancy of a horse like Cisco is 20-23 years. At age 28, Cisco has well surpassed that benchmark and continues to provide inspiration to Kinney and members of her family.

Representatives of Horse & Rider Magazine recently visited the Kinney farm to interview and take pictures of Denice and Cisco. A feature story about them appeared in the January issue of the magazine. As part of the Grand Prize, Kinney received about $4,000 in prizes from the contest sponsors including leather goods and clothing.