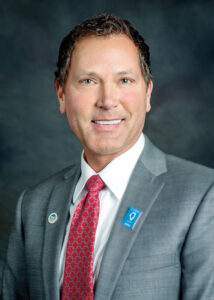 Ken Maschhoff, of Carlyle, was recently named ­president of the National Pork Producers Council (NPPC). A fifth-generation pork producer, he has also served on the Illinois Pork Producers Association Board of Directors.

Maschhoff is chairman of the Maschhoff Family Foods Board of Directors which is the parent ­company of Maschhoffs, LLC, which focuses on pork ­production. The company has grown under his direction to become the ­largest family-owned hog producer in North America, through a network of more than 500 independent produc­tion ­partners. It ­operates in nine states and produces enough pork to feed 16 ­million ­consumer households each year.

The National Pork Producers Council works to ensure that the U.S. pork industry remains a consistent and responsible supplier of high-quality pork to ­domestic and international ­markets.