Co-op commitment to community in action 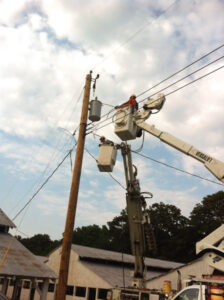 Members of the Menard County Fair Board are more confident about the smooth operation of at least one large part of the fair this year thanks to the completion of a major elec­trical system upgrade. The fairgrounds is unique from most in that it owns and ­operates its own elec­trical ­system, which was purchased from a ­military base and installed at the grounds in the early 1950s.

Fair Board Member Ben Hollis says, “We had trouble with dif­ferent parts of the electrical system over the years, but between our elec­trician and help from Menard Electric Cooperative, we were able to keep things going. It came to the point though where we weren’t ­wondering if something would fail, but when it would fail. Fortunately, we don’t have to worry anymore.”

The new system is safer as well as more ­dependable and efficient. Hollis says the secon­dary system ­replacement was completed by Edge Electrical Solutions and he thanks Daniel Edge for his donation of a portion of his time and equipment.

“The primary system rebuild required all new poles, ­transformers, primary ­conductor, hardware and more,” says Hollis. Several ­employees from Menard Electric Cooperative have worked closely with Hollis and volunteered their efforts for the past several years, and again this year, to complete the project. “We can’t thank the linemen from Menard Electric enough. If it weren’t for them, this ­project wouldn’t have ever been ­possible,” says Hollis.

Menard Electric Leadman Brandon Blair worked on the project and says, “They needed the work done. The co-op was generous to let us use the equipment and we donated our time. It was as simple as that.”

Menard Electric Cooperative General Manager Lynn Frasco says, “This is a great example of when all the ­members of a com­munity work together, a much needed ­project can be completed to ­benefit the ­community.”