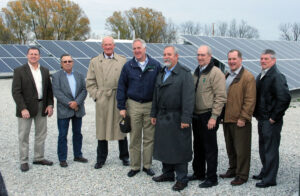 Before touring the solar farm, the co-op leaders discussed rural broadband issues with Shimkus. Prairie Power, Inc. has upgraded its smart grid communication network from microwave to fiber optic cable. Robert Reynolds, PPI Vice President of Member Cooperative Services said, “We are building a fiber optic backbone and it is looped so it will be very reliable. The idea was we need it for business, but it could be a take off point for someone to ­provide rural broadband service. We see that as key to the economic develop­ment of rural areas, and key to keeping some of these kids in the country instead of going to the cities for jobs.”

Shimkus, who serves on the Energy and Commerce Committee, said the committee met with FCC officials last week and they had a lot of questions focused on the need for better broadband access in rural areas. Shimkus said part of the solution is providing better market signals so there are incentives for building out more broadband infrastructure to rural areas.

Using Shelby Electric’s wireless broadband network, the co-op can remotely monitor the local solar farm on a dashboard display in the office. During the meeting the display showed the solar farm was producing 91 kW. Reynolds said, “So that tells me we have cloud cover outside right now. Solar is a good renewable resource, but it is not a ­constant resource. You always need to have something else in your portfolio to back it up. That is why we went with a bit of solar, wind, coal and natural gas – so we have a ­balanced portfolio.”

Shimkus asked how the power was managed when solar output dropped off. Reynolds said power production is handled by the Midwest Independent System Operator (MISO). “It is the air traffic controller for electrons in the grid. So when solar drops off, it sends the signal to the power plants to pick it up,” remarked Reynolds.

That’s different than it was 20 years ago, explained Reynolds. At that time coal plants were built and ­operated to come up to speed and run at their most efficient state. “Today, with wind and solar, you see power plants come up and go back and forth based on the signal they get from MISO as they manage the fluctuations. So it has created some up and down wear and tear and some challenges.”

Shimkus also asked about the cost of solar power. Reynolds said, “This solar farm, which is a moderately sized solar farm, covers about five acres and has 2,052 solar panels, and it costs about 40 percent more than our standard portfolio running cost of power. So it more expensive today, but we felt that we needed to add to the wind energy we have to create a more diversified energy portfolio.” He added that wind energy is still considerably cheaper than solar.

Don’t get left out in the cold
True gardeners are never completely happy, or finished
Q & A about your social security
Six innovative small business models in small towns
How to detect the silent killer in your home
Visiting co-op youth helped senator take on challenges
Is the doctor in?