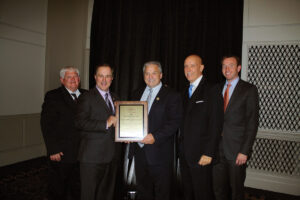 The IMEA presented its 2016 Public Service Award to the AIEC. The two consumer-owned utility associations work together to protect the interests of consumer-owned utilities in the state. From the left are AIEC General Counsel Norman Conrad, AIEC President and CEO Duane Noland, IMEA President and CEO Kevin Gaden, Senior Vice President of Government Relations Don Wood and Manager of Government Relations Nick Reitz.

Traditionally, the IMEA Public Service Award is given to an elected official who has provided outstanding support for the cause of public power in Illinois. But, said IMEA President and CEO Kevin Gaden, “This year the agency chose to do something a little different. But maybe really not so different. It’s arguably impossible to find public servants who are more committed to the cause of public power than the Association of Illinois Electric Cooperatives.”

“In some other states the munis and the electric co-ops are like nodding acquaintances – nice to each other but a little wary, just in case a border dispute crops up. Not so in Illinois,” said Gaden. In presenting the award, Gaden related how the AIEC has often answered the call of the IMEA and its staff – offering advice and sometimes partnerships on such ­matters as safety training, adminis­tration of electric efficiency and ­geothermal programs, ­engineering issues and legal matters.

“But probably the most remarkable and beneficial relationship involves the efforts of IMEA and the co-ops in the arenas of state and federal legis­lation and regulation,” said Gaden. He likened AIEC’s Don Wood and IMEA’s Senior Vice President of Government Affairs Doc Mueller to a legislative tag team wrestling duo. “These guys share information on a daily basis, and often work together to meet with members of Congress, the Illinois General Assembly and the state and federal EPA on such issues as tax exempt finance, ­deregulation and environmental issues, such as the state implementation plan for the Clean Power Plan. It is ­common knowledge in Springfield and in Washington that public power in Illinois – both the munis and the ­co-ops – speak with one strong voice,” he added.

Don’t get left out in the cold
True gardeners are never completely happy, or finished
Co-op leaders discuss rural broadband and solar energy with Congressman Shimkus
Q & A about your social security
Six innovative small business models in small towns
How to detect the silent killer in your home
Visiting co-op youth helped senator take on challenges
Is the doctor in?