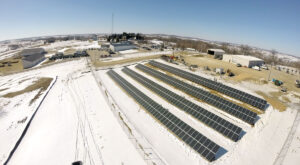 Jo-Carroll Energy’s 100-kW solar farm came online in 2014 and Jo-Carroll members can invest in a solar panel with credits for output going to their bill.

Dairyland Power Cooperative has finalized agreements with two developers to purchase over 15 MW of renewable energy from multiple new utility-scale photovoltaic solar facilities in Wisconsin. Dairyland Power serves 25 ­distribution cooperatives, including Jo-Carroll Energy in Illinois. The generation and transmission cooperative has been a national leader in methane digester generation using waste from dairy farms, and already purchases energy from three solar installations, including one in Galena, Ill.

“Dairyland is a cooperative dedicated to providing safe, reliable and ­sustainable energy. As Dairyland celebrates our 75th anniversary this year, we are excited to announce very significant solar generation plans that far surpass ­current solar resources in the state,” said Barbara Nick, President and CEO.

The solar installations will range between .5 MW to 2.5 MW in scale. These facilities will be tracking systems that follow the path of the sun to increase energy production. Together, the solar facilities will be able to produce enough renewable energy to power over 2,500 homes.

The developers will install, own, operate and maintain the solar facilities. The first projects are expected to become operational this summer, with others ­continuing to come online into the fall.

Prepared for the worst in 2016
Three electric co-ops bringing fiber-based...
Illinois pioneers of rural electrification
On Earth Day let’s remember the importance of...
Co-ops heat up geothermal energy in Illinois