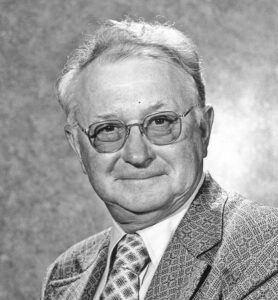 Robert R. Wagner served as the AIEC Board President from 1959-64. Following the ­retirement of AIEC General Manager A.E. Becker, in December 1960, Wagner acted as the interim manager ­during the management search. Under Wagner’s ­leadership, the AIEC and its programs were broadened and ­strengthened to better serve its member cooperatives.

Wagner was also ­instrumental in improving the exchange of communications between the AIEC, its staff and member-­cooperatives. One method initiated was publication of an informal weekly newsletter mailed to all directors, managers and employees of AIEC member-­cooperatives. The “Flash” kept ­personnel updated about events and happenings of importance and interest to the cooperatives.

Representing the board of Western Illinois Electrical Coop., from 1949-1984, Wagner also served on the National Rural Utilities Cooperative Finance Corporation board from 1971-79.

In celebration of the AIEC’s 75th anniversary, this is fourth in a series of profiles on Illinois’ rural electric pioneers.