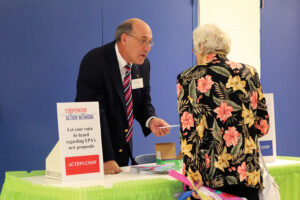 At the Menard Electric Cooperative annual meeting in June, Manager Lynn Frasco talks to a member about the need to send a message to the EPA to keep electric bills affordable. You can send your message to the EPA by going to www.action.coop today.

“More than 500,000 Americans have united to oppose ­regulations that will constrain fuel types for new power plants because they’re rightly concerned about ­affordable and reliable electricity in this ­country,” Emerson said. “Any ­proposal that relies on technology that is ­‘technically ­feasible’ instead of ­‘commercially viable’ belies common sense and threatens the reliability of electricity in this country. Electric co-ops operate in the real world and understand the importance of diversity for fuel sources when it comes to generating electricity.” NRECA sub­mitted its official comments on May 9.

Now the EPA is moving on to ­existing coal-fired plants and has ­proposed new ­regulations that could impact energy, the economy and jobs. President/CEO of the Association of Illinois Electric Cooperatives Duane Noland says, “To combat the EPA’s aggressive new regulations on ­existing coal-fired power plants, we’re asking co-op members to join together and tell Washington not to impose these regulations and to keep energy costs low for hard-­working consumers and their families. We’re asking you, your friends and neighbors to add your voice by signing one of the comment cards available in local co-op offices or by ­visiting www.Action.coop.