Energy efficiency is a lot of hot air 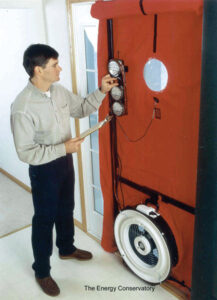 Some things never change, like the laws of nature on Earth. Heat always moves to cold on our planet. So, ­during winter months, the nice warm heat within your house is always moving to the colder outdoor climate. Before long, spring and summer will return and the heat provided from the sun will move into your air-­conditioned home.

Heat is always on the move and will try to relocate anytime there is a temperature or pressure difference between the inside and outside of your home. It really is that simple. If we want our homes to be more energy efficient, we determine where the heat is moving and then take steps to slow and retard the movement.

I learned many years ago that heat would move much faster through an opening. If you can see light around your front door, that’s a perfect example. Air infiltration is unwanted or unmanaged air movement between inside and outside a building. Air infiltration is a major problem in many homes that leads to uncom­fortable homes and high utility bills.

I remember the day when I learned about the magnitude of air infil­tration on the average house. It was the same day that I first witnessed a blower door test on a two-year old house in Cabot, Ark. This was early in my energy efficiency career and I was happy to attend the energy audit. About eight people were in attendance, including two from the company that would test the house. We were told the young ­family that had ­originally purchased the house had moved out because of very high utility bills and that the baby’s bedroom had been extremely cold.

After introductions, we made a visual inspection of the house and it appeared there were no problems ­whatsoever. The blower door unit was then installed in the front door ­opening. We were told the blower door could often find problems that could not be found visually. It was then explained to us that the fan in the blower door would be used to suck air out of the house until the house reached a predetermined reading on one of the gauges. That reading could then be used to calculate the amount of air infiltration in the house.

As the equipment was ramping up, the energy auditor said, “Remember that the amount of inside air going out through the fan equals the amount of outside air coming into the house from some source.”

As the fan reached the proper negative pressure level we all felt a tremendous amount of air ­rushing toward the fan. We also heard a very unusual loud clicking sound coming from another room, and the tech­nician immediately turned off the fan. The clicking stopped, and he then walked down the hall to see what might be making the sound. He said to turn the fan on low – no ­clicking. He said “faster” and a slow click started. He said to turn the fan to high and there was the loud ­clicking we had heard before. He then called us to follow him.

I shall never forget what we saw when we entered the bedroom. The carpet at the exterior corner of the bedroom was flopping up and down. Apparently someone did not order enough concrete to finish the slab in the corner.

The blower door test revealed why the baby’s room had been cold.

Also, while using the blower door, we discovered major air infiltration in the utility closet. The plenum from the heating system was installed through the ceiling and connected to the ductwork in the attic. The problem was they did not install a ­ceiling around the plenum. So, the room was wide open to the attic. We also found air infiltration in many other locations.

Picture a 3-foot by 3-foot window being open at all times. That was the calculated amount of leakage in just one home! Just imagine how much money has been saved, and how much more comfortable the house has been because it was tested and ­improvements were made 25 years ago.

In our seminars I often say the three biggest causes of energy problems in the average house are air infiltration, air infiltration and air infiltration. If your house is uncomfortable and your utility bills are above average, call your electric co-op about an energy audit.