When you step into Flesor’s Candy Kitchen in Tuscola, you immediately see the old-fashioned, turn-of-the-century soda fountain with the marble top, shiny silver soda faucets and the mahogany backbar filled with clear ice cream dishes and soda glasses. You half expect to see a young couple sharing an ice cream soda with two straws and little Johnny spinning wildly on one of the barstools as he takes bites of his ice cream.

Everywhere you look seems as if it was taken from the set of an old television show. There are the mahogany tables and booths, candy cases, stained-glass lights and an old booth where you pay.  However, everything is genuine and has quite a story of its own.

Greek immigrant Gus Flesor came to the U.S. in the late 1800s. A former shepherd and farmer, his family was poor, and he was looking for a better life for all of them. He held many jobs and stumbled upon an opportunity to learn how to make candy. Gus eventually ended up in the small midwestern town of Tuscola where he and another fellow decided to go into business together. They bought the original brick building at the corner of Sale and Main streets, where the business still exists today.

The Flesor children were raised making candy and operating the soda fountain. They learned to  dip chocolates, make caramels and a wide variety of other treats. Gus’ son Paul and wife Betty operated candy stores on the east coast and moved back to Tuscola when Gus was no longer able to work. They and their three children carried on the Flesor tradition.

In the 1970s, the economy took a turn for the worse. Businesses were closing and they were just barely holding on; candy and ice cream just weren’t enough. They attempted a full-scale restaurant, and even a bar, but to no avail. Sadly, they finally had to close the business, auction off the building and its contents, and turn the key in the lock for the last time.

The new owner removed all of the contents and the building sat and slowly deteriorated. The roof leaked, and the original tin ceiling fell down. It sat there for more than 20 years as the painted brick signage on its exterior slowly faded away.

Almost 30 years passed before one of Gus’ granddaughters felt compelled to return to Tuscola. Ann Flesor Beck convinced her younger sister Devon Flesor Story to consider reopening the old store. Devon admits she was a bit bored with her job and that Ann did a great job selling her idea. Both sisters are quite accomplished. Ann holds several degrees, including a PhD, and Devon was an English instructor at Eastern Illinois University, but both felt it was time for a change.

Ironically, just weeks before, Devon heard on the street that the original furnishings were still sitting in a warehouse.

As far as the building, Devon refers to her English degree to describe it. “Remember Charles Dickens’ character Miss Havisham? She was jilted at the altar and after she wore her bridal gown all the time. Her house was covered with cobwebs and was falling down,” she explains. “That’s how I saw this place. No one had touched it and it was rotting from within.”

She made plans to buy back the furnishings. “It was just meant to be,” she says. “The antique dealer had twice tried to sell the contents, but the deal always fell through.”

In essence, the city of Tuscola gave the building to the sisters and helped them apply for monies to help with the renovation and cost of the original furnishings. Ann and Devon applied for tourism dollars and borrowed thousands to make their dream a reality. It took them 18 months and much sweat equity, but they finally reopened Flesor’s Candy Kitchen in August 2004. The town has not stopped supporting them since. 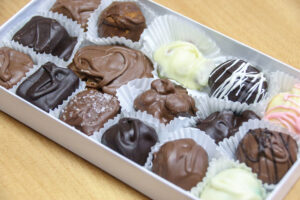 Their brother had all the old candy recipes and, with his knowledge and their memories of working there, they started preparing the candies. Their 80-year-old mother even came in to help dip the candies. Her eye sight was terrible, but she hadn’t forgotten that feel of the chocolate.

More than a decade later, the store now has more than 40 varieties of small-batch, handmade and hand-dipped candies. They range from Paul’s Favorite, a customer-favorite turtle consisting of large crunchy pecans, dolloped with homemade caramel and hand dipped in chocolate. They only use high quality Guittard chocolate and never use preservatives. They also make honey salted caramels, honey nougat, divinity and several hard candies including cinnamon squares and horehound candies.

One of its biggest draws is the soda fountain with handmade sodas, phosphates, sundaes, milkshakes and many more. These are the sodas that will take your grandparents down memory lane.

Their homemade ice creams boast a 14 percent butterfat content, one of the highest in the state. Flavors vary from the basics to a turtle, which contains pieces of Paul’s Favorite mixed in, peanut butter, butter pecan, chocolate chip cookie dough, raspberry, lemon and black walnut.

Daily lunch specials run $6.95 to $7.95 and include items such as Beef Manhattan, Honey Mustard Pork Loin and Beef Liver and Onions. There is also a good selection of salads and sandwiches running from $4.50 to $8.50. We sampled a couple of crowd favorites – the Reuben and the cheeseburger. The Reuben is served on marble rye, with thinly sliced lean corned beef, cheese and a homemade boiled red cabbage in place of the typical sauerkraut. Once grilled, it has a nice crunch on the outside with gooey cheese, lean meat and the cabbage adds just the right combination of bite to the sandwich. It is served with a sweet and tangy house-made Thousand Island dressing, and one bite makes it easy to understand why it’s a favorite.

My co-worker had the cheeseburger which was juicy and fresh. It was a two-hands, two napkin burger that could never be called wimpy, and was served with an abundance of crispy, fresh-out-of-the-fryer French fries.

Flesor’s Candy Kitchen is worth making the trip to downtown Tuscola, whether you are headed down Interstate 57, across Route 36, or just want to take a weekend drive, you won’t be sorry.

Just as the sisters learned the trade from their father and grandfather, they would love to share it with anyone that is “genuinely interested in learning this almost archaic trade,” says Devon. “Not just on a lark, but if you would be seriously interested, visit us. We would like to pass on our knowledge.” 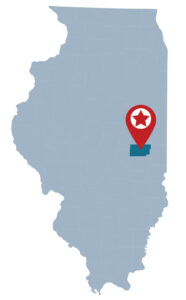