Retail has always been in their brains. From the time they were little, sisters Stephanie Harrison and Elizabeth Patridge remember growing up in a family business.

“We grew up always doing something,” says Stephanie. “Our dream was always to open something. We had an aunt who was in clothing retail in Texas and Atlanta. We would come home from a visit and people would wonder where we got our outfits. They were brands unknown in this area.”

They talked about opening a business with their mother, Pam Garrett, for a long time. They had no idea what it would look like and thought about home décor or women’s fashion.

“Keith [Elizabeth’s husband] started studying trends and markets and discovered if the market plummets, women will still shop because it’s therapy,” says Elizabeth. “They will buy for themselves, but probably not home décor.”

“It literally took mom saying, ‘we’re doing this’ to make it happen,” says Stephanie. “In October 2013, we were driving to Atlanta (Ga.) on a buying trip. She called Elizabeth and said, ‘We’re doing this, you’re either in or you’re out. Make up your mind.’”

Elizabeth answered no. Her husband worked in retail and she wanted nothing to do with it.

“Keith and I were in the midst of surviving retail,” says Elizabeth. “He was seven days on and seven off. I felt like a single parent … because he worked so much. … Retail hours are hard, and I didn’t want to be married to the hours.”

She realized joining Glamour Farms Boutique would be the best thing for her family. “Being part of a close-knit family, I knew we needed each other’s talents and I enjoy creating. It became fun for me.”

The sisters have different personalities. Stephanie is interested in hair and makeup and taught music at that time. Elizabeth taught high school business classes and enjoys sports, computers and technology. Their mother had worked in business, helped develop software and has a creative side.

After that first buying trip, they started showing the products on Facebook.

Elizabeth explains, “When we started out, we were only going to do an internet business. We individually invoiced on PayPal and distributed from the basement in my parent’s home.”

A month later, they were asked to set up a popup boutique at an event in Flora. “It blew our socks off,” Elizabeth says. “People came from everywhere and we discovered there was a real need for retail in this area.” They had 500 invoices in four hours. 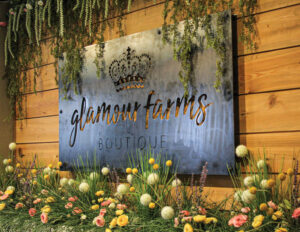 People asked them to open a shop. They found a house, renovated it in a week and opened Glamour Farms Boutique in December.

Once comfortable operating the store, they wanted an online presence, but they had a conundrum. There weren’t enough employees to make it all work.

“We were handling the store to make money to employ folks so we could have an online presence,” explains Elizabeth. “We did a little advertising but at that point we were just trying to keep our heads above water.”

According to Elizabeth, the first website was a nightmare. The software allowed overselling, making it impossible to track inventory. Plus, all inventory was stored in moving pods behind the house making it difficult to find items. Without overhead lights, they used flashlights to dig around in boxes.

In 2015, they shut down the website, but that didn’t fix the storage issue and running distribution through their two-car garage. There wasn’t enough space.

They purchased a warehouse in 2017, where the business is currently located in Louisville, Ill. In July, they moved to the new location. It provided space for a warehouse and room for a retail location in addition to selling online, but by 2018 they realized it didn’t make sense to keep the store open.

“People follow us on Facebook and, thanks to the broadband speeds we get from Wabash Communications, we can do Facebook Live feeds which has been a tremendous asset,” says Elizabeth. With the ability to interact on Facebook Live, customers can ask questions and have even asked them to try on items to see how they fit.

Because of social media algorithms, once someone has clicked on the Glamour Farms Boutique Facebook page, they can track what people view.

“We’ve been forced to follow what Facebook does, which led us to live showings,” explains Elizabeth. “Without Wabash Communications, we wouldn’t be able to do that. Many boutiques can’t do live videos because of poor internet speeds. We follow other boutiques and time after time I’ve seen messages of a broadcast interrupted or messages about them being glitchy. [The boutiques] think it’s their software, but most of the time it’s their streaming internet speeds.”

When the sisters travel, they can’t always go live because of poor internet speeds.

“We wanted to do a live while on a shopping trip,” says Stephanie. “We spent all afternoon getting everything ready and it was a disaster. We had no good connection, and this was in downtown Atlanta!”

In 2017, the business had speeds of 75 mg for downloads and 10 mg upload. Thanks to funds from the Rural Utility Service and the USDA REDLG (Rural Economic Development Loan and Grant) program, Wabash Communications upgraded its service to increase broadband speeds to 1G for downloading and 100 mg for uploading. It has made a major difference in their business.

With the Facebook Live sessions, they can have 1,000 comments over the course of the session from people across the country.

“We love the interaction with our customers,” says Stephanie. “We get people from Texas commenting. They give us prayer requests or tell us about themselves – it’s a constant connection. A woman messaged me from Cabo [San Lucas] saying she met a lady from India who asked her if she knew of a place called Glamour Farms! Without the internet, we wouldn’t have these connections. It brings on a whole new world and we have a connection with people we never would have known.”

Glamour Farms employs 45-50 people, both full- and part-time. Employees cross train to learn everything from pulling orders to marking inventory, shipping and accepting shipments. If one area gets busy, someone else can step in and help.

They initially had 6,000 square feet of space, but with a growth spurt last spring they added an additional 5,000 square feet to house shipping and receiving along with more inventory space.

Glamour Farms Boutique may be in a small town, but the owners have big ideas and are making a difference to the local area, helping others to think bigger than themselves.

“Kids don’t know what is available for them when they’re from a small town,” says Stephanie. “Things are much broader now and there are so many different opportunities that keep arising. A lot of people are doing cool things – things you can do from anywhere. Opportunities exist in rural areas.”

“Glamour Farms started in the basement of their home and grew to something much more,” says Barry Adair, president/CEO of Wabash Communications. “Without fiber-optic internet, their business would not be able to do necessary daily functions such as processing orders, uploading new content and producing live sales videos. Wabash Communications strives to not only provide high-speed internet to Glamour Farms Boutique but to all local rural business owners.”