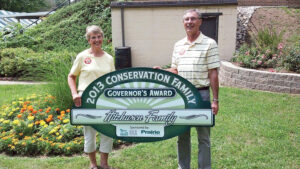 Tom and Margaret Hitzhusen, from Geneseo, were recently named the Association of Illinois Soil and Water Conservation Districts’ “Governor’s Conservation Farm Family” for 2013. Tom is a former director of Farmers Mutual Electric Company, prior to the merger with Jo-Carroll Energy.

When the Hitzhusens moved to their current farm, the land was in very poor condition. The previous owner left no crop residue on the soil surface and had not utilized conservation practices. Due to the lack of good stewardship practices, massive amounts of erosion had been taking place for many years.

Prior to the Hitzhusen’s ownership, the creek running through the farm had been left to erode. Trash dumped into the gullies had been used to try to slow down their encroachment into the fields, but only ended up escalating the problem.

Upon taking over the farm, the Hitzhusen family took action to reclaim their fields from the gullies and creek.

As good stewards of the land and their community, the Hitzhusens have always been involved in their community and in educating people about conservation on the farm. The family hosts numerous tours with a number of stops along the way to explain and show the different methods that have been used to conserve the environment around the farm. Besides tours, demonstrations of new conservation practices have been hosted by the Hitzhusens.

USDA projects median farm will lose $2,300 in 2013
Built on pride and patriotism
More senior co-op members using social media
Galena, Illinois named as one of the friendliest...
How to communicate with your family during a...
Illinois coal exports set record in 2012; now in...
Illinois utilities cooperate on State Fair Energy...