How to dispose of batteries 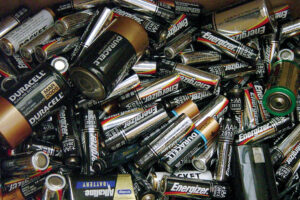 Truth be told, those old used up disposable alkaline batteries (AA, AAA, C, D, 9-volt, etc.) aren’t the environmental menace they used to be before the federal government mandated taking out the mercury as part of the Mercury-Containing and Rechargeable Battery Management Act of 1996. These days, in every U.S. state except California (which requires recycling of all spent batteries), it is safe and legal to throw them in the trash. Today’s alkaline disposables are composed primarily of common metals-steel, zinc and manganese that do not pose a health or environmental risk during normal use or disposal.

Unfortunately, some other kinds of disposable batteries, such as the increasingly ubiquitous ­alkaline ­manganese “button cells” ­(commonly used in digital ­thermometers, ­calculators and many toys), still contain mercury, and the federal government provides little ­guidance regarding their proper disposal. The Mercury-Containing and Rechargeable Battery Management Act doesn’t mandate phasing mercury out of alkaline ­manganese button cells because, at the time of the law’s ­passage in 1996, including mercury was the only way to control the potentially dangerous formation of gas inside the ­specialized ­miniature batteries. Lithium ­button cells are a safer, mercury-free alter­native now widely available, but ­consumers often opt for the still cheaper alkaline ­manganese variety.

“The use and disposal of mercury-added button cells are unregulated at the federal level,” reports the U.S. Environmental Protection Agency (EPA). “They do not have to be labeled; it is legal to dispose of them in the household trash.”

Fortunately, the recycling of most types of rechargeable batteries (which can contain potentially harmful heavy metals and other contaminants) remains easy thanks to an industry-backed program called Call2Recycle (www.call2recycle.org) that points people toward recyclers and retailers that can take them off their hands at no cost. Many electronics, big box and drugstore chains that sell batteries (BestBuy, Walgreens and others) will also take them back for free and send them off for recycling.

County fairs contribute to community
Caught in a storm
Winmail.dat no more
Selling classic cars country style
Finding a secret fishing spot
Watering dos and don’ts
The Michelangelo of motorcycles
The science behind insulation
FEMA help for storm victims not always there for rural areas