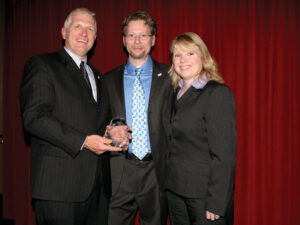 John Freitag, Vice President of Operations for the Association of Illinois Electric Cooperatives (left) and Kristin Banks, Coordinator of Workers Compensation and Youth Programs for the AIEC, accept the 2012 Inspiring Efficiency Impact Award from Jay Wrobel, Executive Director of MEEA.

For the second year in a row the electric co-ops of Illinois have won the Midwest Energy Efficiency Alliance’s (MEEA’s) “Inspiring Efficiency Marketing Award” while competing against similar programs from the region’s largest investor-owned utilities.

Last year, Prairie Power Inc. and its electric distribution co-ops won for a 16-foot “Energy Efficiency Wall” that illustrates various opportunities for air infiltration or leakage within the common home due to poor construction practices and materials.

The HomE program ran from May 2010 to September 2011. More than 90 percent of participating homeowners followed through with at least some of the audits’ recommended improvements.

The program covered 30 percent of the costs of insulation and weatherization, with rebates of up to $1,500 for heating and cooling system improvements. The funds were available from a grant of $2.5 million through the American Recovery and Reinvestment Act and it spurred $25 million in energy efficiency improvements. In addition to creating jobs, the program will help co-op members save nearly half a million kWh annually. EEA.

Manufactured Savings
Home Grown Goodness
Reduce, Reuse, Recycle
The Association of Illinois Electric Cooperatives salutes …
Too humid, too dry or just right?
The death of a tree
More power can improve safety
Keeping it local and reliable
Who am I?