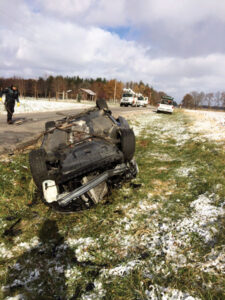 Crews from Rural Electric Convenience Cooperative arrived at the scene seconds after this Volvo collided with a Humvee on an Illinois road.

Driving the roads of rural Illinois co-op employees are often the first on the scene of an accident. That’s when their safety training and ­willingness to help can save lives. In November three members of an electric cooperative line crew began their work week by ­helping the ­victims of a head-on collision.

Seconds after a Humvee driven by the daughter of a co-op member collided head-on with an oncoming Volvo, the linemen from Rural Electric Convenience Cooperative were on the scene to tend to the wounded.

“When we crowned the hill, the young lady was standing beside the Hummer and the guy was trying to crawl out of the car which was up on its top,” said Kenny Williamson, a Line Foreman for the Auburn-based co-op. “The Humvee was heavily damaged and the Volvo was overturned.”

Williamson reported the accident to his dispatcher, who in turn contacted the county sheriff’s office and paramedics.

In the meantime, Journeyman Lineman Clark Bowman rushed to the overturned vehicle, where the driver was struggling to free himself from the wreckage.

“He was bleeding from the face and he couldn’t move his hip, so I helped pull him out and covered him up with my coat,” said Bowman.

Because the accident occurred near a blind ­intersection, Walt Wallace, a Journeyman Lineman and the third crew member, grabbed hazard cones from the backs of two co-op trucks to mark off a safety zone.

“We’re glad Ken, Walt and Clark got involved and were in a position to help people after this accident” said David Stuva, President and CEO of Rural Electric Convenience Cooperative. “They not only helped the injured, but they did a great job backing up first responders at a time when assistance was really needed.”

National water use at lowest levels since before...
Route 66 gets electric car charging stations
Thank you for telling the EPA what you think
Winter heating assistance available through LIHEAP
Power reserve shortfall predicted for 2016