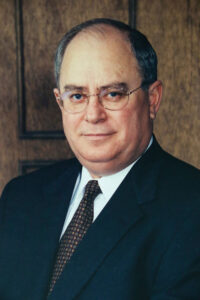 Earl W. Struck joined the AIEC in 1979 as a public affairs represen­tative in the Legal and Public Affairs Department. He became director of that department in 1983, and in 1994 became the third CEO of the AIEC, replacing the retired Thomas H. Moore.

Struck was known as a master at building alliances and consensus and was an integral part of House Bill 2936, which allowed electric and telephone cooperatives to preserve invested capital for their members.

He served as president/CEO during the time when the initial Illinois electric utility deregulation law was being written. It advocated a single co-op/municipal utility position that all decisions related to entry into a deregulated market­place be left to the governing bodies of each individual co-op or municipal. The law passed and was signed in 1997.

Struck exemplified the ­cooperative spirit and its principles. He understood that cooperation was a powerful force for progress.

In celebration of the AIEC’s 75th anniversary, this is seventh in a series of profiles on Illinois’ rural electric pioneers.