There are a couple of things more important in life than just about anything—even money. Faith, family, friends and forgiveness are just a few of life’s most important things. Another thing important to many Illinois families is the family farm. It’s where roots are put down literally and figuratively. It represents more than a business. It’s home. It’s memories. But without proper estate planning it could also fracture a family forever.

There’s an old saying that some topics just shouldn’t be discussed at the dinner table, namely the touchy subjects of religion and politics. There’s one other seemingly taboo topic, however, that needs to be addressed, especially by everyone involved in a family farming operation. While uncomfortable to bring up, what happens to the farm when mom and dad are gone is almost always a pressing issue. The subject is too often ignored until it is too late.

Grant Noland, an eighth generation family farmer helping manage a 3,800-acre farm near Blue Mound says, “As land values have greatly appreciated over the past five years, estate planning has been a staple at meetings, workshops and conventions that I have attended. For the long-term health of the family and the farm operation, those with an ownership interest in the business must discuss and implement an estate plan. Although the easiest approach is to table the discussion to a later date, delaying the conversation could be devastating to the dynamics of the family and farm operation. As a member of a multi-generational farm operation, I clearly see the value in establishing an estate plan to protect our greatest assets—family relationships and the land we own.”

Tom Deans, author of “Every Family’s Business,” a book on succession planning for family enterprises, calls silence “the great destroyer of wealth” in family farming situations. 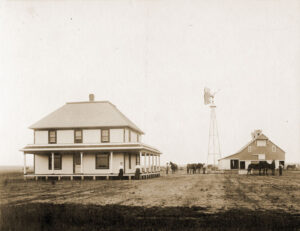 “If the children raise the subject, they look greedy; so they don’t say anything. If the parents start the conversation, they’re afraid it will spin out of control and lead to family in-fighting. So they simply don’t have the conversation and there is no plan,” he says. “Yes, there is risk in having the conversation, but there is far bigger risk in leaving it until it is too late.”

Deans says it is never too early to begin working on a farm estate plan.

“The key thing is to start the conversation in the family early on,” he explains. “The families that are successful in transferring the farm or any sort of wealth are the ones that have mastered the art of talking about what is inevitable.”

Careful consideration of the “what ifs” and “whens” is especially important for farm families, perhaps more now than ever before. With land prices in some parts of the country at or near all-time highs, the values of even the most modest farms, and the resulting estates, can be staggering. And with those increased values come a greater risk of large tax bills, hard feelings and even the unwanted sale of the family farm.

Farmland values have been going up in recent years also making estate planning more important. For example, a 173-acre farm in Champaign County sold at auction in February for $15,375 per acre, possibly setting a new record for the area. “This is the first time I’ve seen farmland prices without development potential exceed $15,000 per acre in Champaign County.” said Joe Bubon, executive vice president of Murray Wise Associates, which is a leading national agricultural real estate marketing and auction company based in Champaign.

“The biggest difference in estate planning in agriculture is that the family really cares about what they are passing along and that is the family farm,” explains attorney Curt Ferguson of The Estate Planning Center in Salem. “Stock portfolios or IRAs are all just the same. They’re just dollars and can be liquidated, but a farm is sacred in and of itself. That’s something a family usually wants to hold together and that makes things difficult.”

Complex family dynamics, especially if some children are involved in the day-to-day operation of the family farm, make estate planning even more complicated.

“Do you give more of the farm to the ones who are farming, or more to the ones that don’t farm because you’ve already helped those who are farming?” he asks. “There are two sides to that coin and there’s jealousy involved on both sides. Some would say that the ones who are farming have already had opportunities handed to them, so in some ways, they are protected. The other side is that if the farming child or children didn’t stay and farm, perhaps none of the operation would still be there. Those are the kinds of questions that owners need to grapple with.”

Hoff points out that in some cases heirs who have remained on the farm and worked for less than normal wages have received an inheritance no larger than those who have moved off the farm, contrary to their expectations. He adds that sometimes what parents plan, is not what children want.

“Communication is key,” Hoff says. “It’s important on the farming side to know what the heirs want. Dad and mom may set up an entity that all of the children are involved in, but the siblings may not want to farm together.”

Ferguson adds, “Shared ownership can be a hotbed for problems. As can leaving it up to the heirs to decide. Remember that farm prices have astronomically appreciated and farm machinery can be an asset valued in the millions. If someone is going to farm, but doesn’t yet have his or her own farming operation, how do you do that? Do you leave the equipment and land to do that one individual, or do you set up some sort of preferential way he or she can buy it from the other kids?”

For that reason, Deans often suggests a somewhat controversial approach: the farm needs to be sold.

“The gifting of the farm is what I think causes all of the problems,” he says. “When families can answer the question of who will buy the family farm, either inside the family or outside, all of the acrimony and family dynamics end. It means the rules of commerce are used and respected.”

Both Deans and Ferguson say that when all of the parties involved understand and talk about the plan, even if it involves selling the farm to one of them, everyone is able to plan for and be comfortable with the eventual outcome.

“Most clients agree that they would rather their children still have family reunions after they are gone, versus leaving them land and money and never having them talk to each other again,” Ferguson says.

He encourages his clients to apply what he calls the “snapshot” approach to estate planning. By that he means developing a picture in their minds of what they would like things to look like after they are gone and then working to make that “snapshot” a workable plan.

Regardless of how the assets will be distributed, Hoff says estate planning needs to happen sooner rather than later.

“Most farmers probably have a will, but many haven’t gone much further than that,” he says. “I get too many phone calls saying ‘I really need to think about doing some estate planning. I have a will, but it’s 40 years old.’ I tell them to get planning quickly.”

Hoff says he recalls a meeting with clients whom he immediately referred to an attorney because when he saw the will the couple had, he realized it no longer would accomplish what they wanted. In fact, it left a substantial portion of the estate to the farmer’s ex-wife, not his current spouse.

“What if something would have happened on their way home,” asks Hoff?

The planning needs to start early and be an on-going process, but it also must be thorough and well thought out. Additionally, planning should probably involve more than just the parties involved.

“The ultimate plan needs to be a team effort with your attorney, your accountant, financial planners, life insurance agents and others,” Hoff says. “Everybody will have some different ideas and you need to hear all of them before you decide what combinations of ideas you will use.”

Tax implications must always be considered in agricultural settings. While the first $5.25 million of an estate is exempted from the so-called federal “death tax,” Illinois imposes taxes on estates exceeding $4 million in value.

Experts says estate planners can help farm families achieve their goals and handle excessive tax burdens through a variety of tools including wills, trusts and gifts. Most importantly, however, Hoff says, make sure you completely grasp how your own assets, your own legacy, will be handled.

“Make sure you understand your plan and review it every few years,” he says. “Have somebody else read it and tell you what they think it says. If it’s the same as what you think, then you’re good.”

While wills, trusts, directives and other complex documents are always required as a part of estate planning, there are some very simple ways to also make things easier for your family members during their time of grief. Here are a few:

“Most people, when they die, leave a mess,” Ramsey posts on his site. “The grief is exponentially larger because you’re mad at the person who died because they left you with a mess. Leave a legacy. Have a drawer in your home that has all the details.”