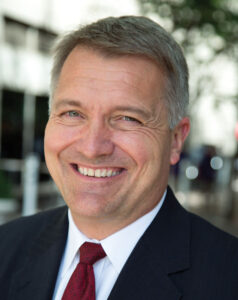 NRECA President Mel Coleman says, “Jim will bring to the position a broad knowledge of the issues facing rural America and will be an ­inspirational leader for America’s electric cooperatives.”

During his tenure in the U.S. House of Representatives, from 2001 to 2015, Matheson served as a member of the House Energy & Commerce Committee. The respect Matheson has on both sides of the aisle, and his ability to bridge political and policy divides to find common ground, will serve electric ­cooperatives very well. In addition to his extensive background in Congress and public policy, Matheson worked in the energy industry for several years.

“I am excited by the opportunity to lead NRECA and to continue to build on its remarkable record of service to its members,” Matheson said. “I am ­honored to be associated with this member-driven organization that has a strong reputation for quality and integrity.”