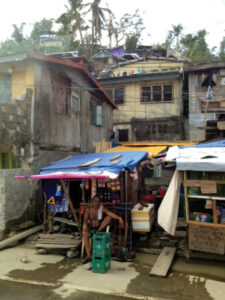 Filipinos are trying to regain some semblance of normal life.

Michael Guidry, a former NRECA board president, and Martin Lowery, NRECA executive vice president, toured parts of the Philippines devastated by last fall’s Supertyphoon Haiyan. During the visit, they awarded more than $120,000 raised by the NRECA International Foundation to help 11 co-ops rebuild their leveled ­systems. Donations from U.S. co-ops and individuals will help ­recipients defray reconstruction costs of low-income ­members and other economically ­disadvantaged residents.

“The destruction is degrees of ­magnitude greater. People are coping…but the reconstruction challenge is simply ­overwhelming,” he said.

Of the island nation’s 119 electric ­cooperatives, 33 sustained significant ­damage and 11 were nearly destroyed. Estimates to rebuild electric systems ­damaged by the Nov. 10 typhoon could exceed $120 million, according to the Philippine’s National Electrification Administration.

Power restoration in the hardest-hit areas surrounding Tacloban is about 40 percent, said Lowery. “Electric service is a first priority for stable planning. Without it, many who left after the storm will not return. With full service, many will come home and begin the massive work of building the housing stock.”