Turn onto Archer Avenue in Marshall, a town of approximately 4,000 and the county seat of Clark County, and you are welcomed by a brightly-colored mural featuring a farmer and the words “Agriculture” and “Marshall, Illinois.” A block or so up the street, as you glance to the right, a huge “Harlow’s Dog N Suds” mural grabs your attention. Take a left at the courthouse square, and another mural, “The National Road,” appears. Intrigued, you park, grab your camera, and begin to walk. At almost every turn in the heart of this tidy town, there is another mural, as bright as if it were painted yesterday. And, in a sense, it was. 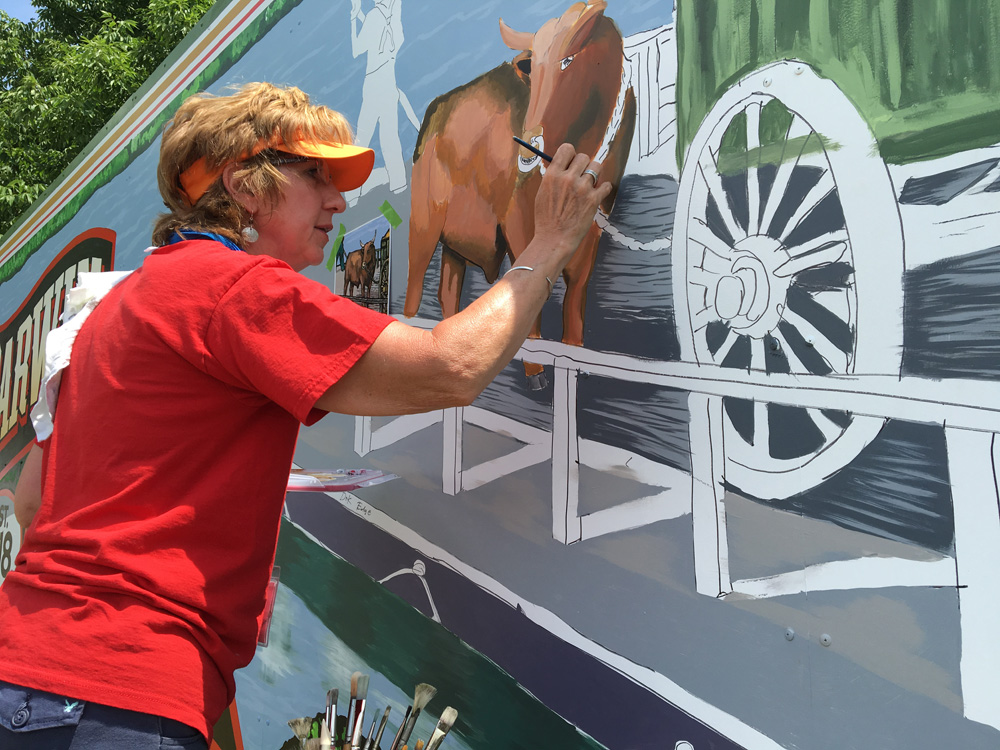 But where did these murals come from? Marshall is the latest of 10 Illinois towns to host a Walldogs event. These events are a blend of town spirit, initiative, local festival, public beautification and the passion that a group of artists have for their craft. “We’re professionals who take time from our own schedules to come together once a year. We help a town tell its story, we leave a legacy, we take away wonderful memories …and we hope we leave some wonderful memories behind,” says Nancy Bennett, who could be described as the group’s godmother. Though they have been doing this for the past 22 years, the Walldogs, named after their late 19th and early 20th century counterparts who created the now faded signage we see on the sides of many urban buildings and rural barns, have no formal structure, pay no dues and elect no officers.

So how does a town qualify for a Walldogs event? Jennifer Bishop, executive director of Marshall’s Chamber of Commerce describes Marshall’s path to the event.  “In 2012, Arcola hosted a Walldogs event. The mayor and one of the aldermen visited Arcola. They liked what they saw and decided Marshall could benefit from the same.” That same year, Marshall did a test mural. It was so well received that the town decided to move ahead with a full-blown event. They contacted the Walldogs and found that they could get on the schedule…. in 2016.

Events and individuals worthy of being honored had to be chosen. Bennett explains, “There are guidelines. First of all, we focus on events, individuals and past businesses or entities that the local people remember fondly; things that have had an impact on the community’s history. The community supplies the subjects and the reference materials, the Walldogs’ project leaders and the coordinator determine the content and layout, and any changes made to the designs are limited to factual or graphic errors.”

It was decided the Walldogs event in Marshall would be called “From Here to Eternity” in honor of James Jones’ most famous novel of the same name. Jones was one of the founders of the Handy Writers Colony that existed in Marshall from 1950 until 1964, and part of the novel was written in Marshall.

Preparation for these events takes time, and funding. According to Bishop, “I spoke with Scott Lindley, a local artist who is a member of the Walldogs, and coordinated the Arcola event. He told me we were looking at an average of about $5,000 per mural, plus a lot of logistical support.”

Although participating Walldogs are not paid for their work, the event coordinator and the designers of the individual murals do receive a stipend. And, there is the cost of feeding and housing the artists, along with the cost of the paint and other materials, including frames for the some of the murals.

The Clark County Historic Society and the Chamber Board identified some 30 topics, and with the help of the Walldogs, narrowed it down to 16.

As the fundraising continued, businesses, families and individuals came forward. Eight sponsors each provided the $5,000 estimated cost of funding an individual mural. Individuals donated amounts ranging from several hundred to $10 or $25, and there were in-kind donations. Marshall business Yargus Manufacturing, donated and assembled the aluminum frames needed for some of the murals. 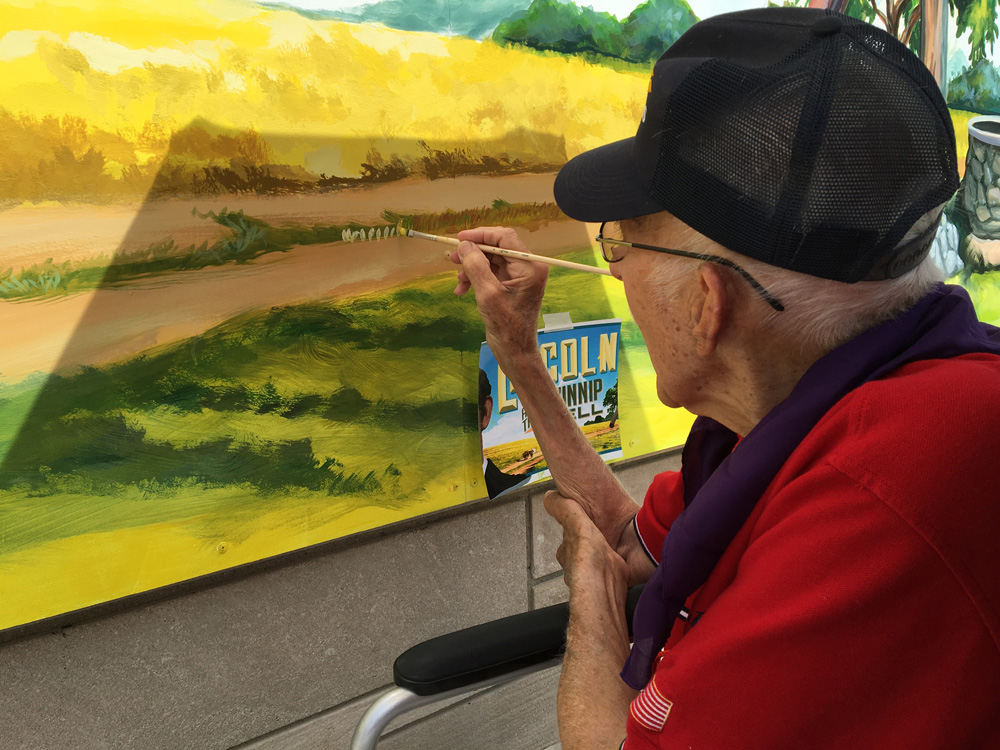 The event was set for June 22-26, 2016 and on June 22, with the scaffolding, ladders and lifts in place, the project leaders, who were responsible for the individual murals from start to finish, sketched the designs onto the buildings or panels. They created, in essence, a huge paint-by-numbers canvas for the artists and volunteers who would complete the murals.

During the next several days, artists, including project leaders from New Zealand and the Netherlands, along with local residents, labored to make the artists’ designs a reality. It was exciting. Some were content to merely watch the creation of the murals or provide logistical support, while others signed up to wield a brush. Among the latter was Andy Anderson of Paris.  According to Bishop, Anderson, who is 88-years-old, was among the first to sign up as an artist. She explained, “He said, ‘you know what, I only live once and I’m going to do it.’ Then, two weeks before the event, Andy broke his hip and required surgery, but his wife called me to say that he had already told the doctors he had to be released by the 24th because he planned to be at the event. On June 24, they released him in the morning, he came over and we put him on the Gunnip Well mural, so he could work from a wheelchair. We hoped that he could make it an hour, and he painted for four hours.”

Everything wrapped on June 26 and the Walldogs left the town with 16 newly-minted murals and some wonderful memories.

Marshall’s murals are only a few months old, but Jennifer Bishop says they have made changes in the town itself – a sense of ownership, increased cooperation, more civic pride and an added interest in the local history.  There are plans to add a mural each, year working from the original list, and the town is considering the idea of working with Arcola, Danville and other Illinois mural towns to create a driving tour.

As mentioned earlier, 10 of the 22 Walldogs events have taken place in Illinois towns. To see more images from these and other communities in Illinois and other states and to learn more about the Walldogs, go to www.thewalldogs.com or find them on Facebook.

Legend of the Gypsy Queen 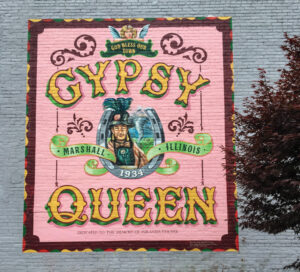 One of the murals in Marshall touches on the interesting, if somewhat sketchy in detail, story of the Gypsy Queen. In the late 19th and well into 20th century, according to local lore, Gypsies or Roma, as they called themselves, often passed through Clark County and other areas of Illinois. In those days it was not unusual for even the most “decent” folks to fear and mistreat gypsies. But for whatever reason, the citizens of the county, and Marshall in particular, were kind to gypsies. In gratitude, the Gypsy Queen, Miranda Cooper, placed a “good” curse on the community, saying that they would never be destroyed by a tornado. Miranda Cooper died in 1934 and her stone can be found in the Marshall Cemetery.

It may be just a story, but two things are certain – the mural is an eye catching work of art and to date Marshall has never been hit by a major tornado.

Sign painting has been around for centuries, but its heyday in America began in the 1840s and lasted through the middle of the last century. However, the term Walldog does not appear until the 1890s or the first decade of the 20th century. There is no definitive answer on where the term came from, but the commonly accepted theory is that many painters were itinerant workers whose profit margin was totally dependent on getting the job done fast. So they worked like dogs, sunup to sundown, ignoring heat, cold and other inconveniences to complete the signage. As most of the signage was on the side of a building, often the entire side of a multi-story building, they required ropes to get up and down, so they were tethered or “leashed” to the wall; hence the term “walldog.”