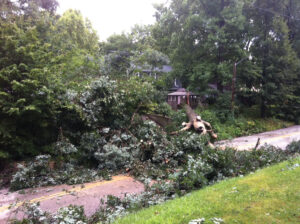 This past July, my yard changed in the matter of seconds. In the midst of a Sunday night storm, with strong winds and lightning, my next door neighbor’s oak tree came down. Two flashes of blinding light, coupled with two loud thunder claps in the ­following nanosecond, and that’s all she wrote.

Now, you’d think there would have been a third crash as the tree hit the ground with a resounding thud, ­shaking the windows and skewing the pictures on the wall.

Well, I suspect the four power lines and the miscellaneous cable lines provided the necessary ­bracing. Of course, the wind was still ­blowing, the lightning flashing in the now dark neighborhood and the ­thunder sounding like miked bowling balls hitting the pins. So, if it did hit hard, it wasn’t as impressive as what knocked it down.

The oak tree was probably older than Springfield, surviving as the street in front of my house was carved out of the hill. It might take three or four people holding hands to encircle it.

Okay, the good news is the tree fell away from every house and caused no structural damage. It took some branches from my red horse chestnut and fringe tree. It displaced a family of raccoons who have called it home for 15 years, though you would have thought the lightning and ­dropping would have made raccoon toast. However, as the street crew removed branches, the mother raccoon raced across the street, followed by her offspring, into the woods. Probably the rotted nature of their nest cushioned the blows.

The bad news is the tree is gone. Well, the 21 hours without power on a hot summer day is probably bad news. Only the milk proved ­problematic, and it could have been an oversensitive nose and maybe some psychological mumble jumble. When the manufacturer says materials will stay frozen for 24 hours IF you don’t open the door, it’s true. Or at least on new appliances. With the old freezer, probably everything would have melted.

You could look at closing the street for two days as bad news, but on the other hand, there is something nice about no traffic.

Was it obvious the tree fell? Not really, but truth be told, the tree had several key factors that might be suspect.

The tree was close to power lines, which meant it was constantly pruned, and a little unbalanced because of it. Still, it was pruned correctly and not topped.

My shade garden no longer has morning shade. It will be interesting to see what happens to the hostas, ferns and Japanese maples that did okay. Maybe they’ll do better. There’s no doubt the grass will say “Wow! Finally light! Let’s go to town.” Hopefully, though that may mean more mowing.

There’s little I can do except watch and wait. And take a look at my trees and see what is well rooted and what isn’t, and what might cause problems. Fortunately, there is nothing original left from when I bought the property 20-plus years ago. All the landscape plantings are mine, and they are pretty well balanced.

But it also means I’m relying on my other neighbor’s oak tree to ­continue to provide the shade. And since there is no way to control the weather, I can either fret or do nothing. Doing ­nothing is probably the best route.

For our farms, freedom, food and jobs