Is a tomato a fruit or a vegetable? 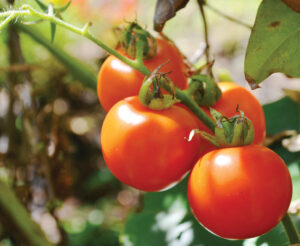 This specific column serves ­multiple purposes – it will be ­informative, it allows me the opportunity to talk about a subject that a childhood friend asked about and I thought I had done, and it should be ­educational to educators who keep messing up the issue. And for that, it should be therapeutic on this end.

It all begins with this ­question: Is a tomato a fruit or a vegetable?

If we call a tomato a fruit, then there is no such thing as a ­vegetable. Nothing at all. Zip. Zilch. No vegetables.

Taking this approach first, ­botanically (and that is the key word), the part of the tomato we eat is a fruit. Taking it to the nth botanical degree, it’s a berry. A botanical “berry” is a fleshy fruit, which is really the ripened ovary of a plant (which is what a fruit is), with many seeds on the inside. Of course, with that botanical ­definition of a berry, many of our so-called ­berries such as strawberries, blackberries and raspberries really aren’t berries.

Many of our garden vegetables are actually fruits/berries: eggplant, cucumbers, squash, pumpkins, watermelons (though some of the ­specialized berries are called pep). Grapes are berries. Technically, so is a banana. A pepper is simply a fruit, the ripened fleshy ovary.

So, what are the so-called ­vegetables if they aren’t vegetables?

Well, carrots, beets and ­radishes are roots, lettuce and spinach are leaves, as are Brussels sprouts, ­cabbage and kale, and cauliflower and broccoli are flower buds. Potatoes are underground stems, though sweet potatoes are roots. Kohlrabi looks like a root, but is a swollen above-ground stem. Asparagus is a stem and so is rhubarb.

Peas and shelled beans are seeds, though they go by the technical name of caryopsis. Corn is a kernel. The ear or the pod with the pea or bean inside, though, is a fruit.

Apples, peaches, plums, cherries, etc. are also fruit, given specific names such as pomes or drupes (stone fruits) and aggregates include strawberries and the accessory berry of ­pineapples. My favorite is the fig’s mature synconium.

The issue is the mixing of terms. Botany is a science and is almost black and white. The word “vegetable” botanically means the plant kingdom, but is really used as an adjective in front of other words and not as a noun.

Horticulturally, though, we lump plants into categories of fruits and vegetables, just like ­annuals and ­perennials, and trees and shrubs. Those are not always black and white. It’s not a science.

Horticulturally, we plant most ­vegetables ­annually and are usually eaten ­during the main course of the meal and not for ­dessert, such as tomato cake or a radish cobbler. Fruits tend to be perennial and grown on woody plants such as ­brambles, shrubs and trees, and often are used mainly for ­desserts, though sometimes in salads.

There are perennial vegetables such as asparagus and rhubarb, with the latter used in desserts more than during the main course of the meal. We make pies out of pumpkins and squash, and fruit salads with watermelons and cantaloupes. Strawberries, while perennial, really aren’t grown on a woody plant. See? Not black and white.

Of course, the U.S. government got into the act clear back in the 1890s, when the U.S. Supreme Court declared, for tariff purposes, the tomato was a vegetable, but recognized it botanically as a fruit. It was a well-thought out concise three-page declaration.

Now, it’s your choice, but remember to be consistent across the board. Is the tomato a fruit or a vegetable?