Artisans have played an important role in society since beginning of time. In the early days, their skills were necessary for survival. Some included forging metal to make weapons, while others required processing natural fibers and animal fur to make clothing, blankets, tents and brooms.

Today’s artisans have turned a hobby into something more or have adapted old practices to serve today’s manufacturing needs. And this business segment continues to grow. According to Forbes magazine, if the artisan business sector was a country, it would be the fourth-largest economy in the world, with even greater future potential.

Since around 6,000 BC, people have been using animal fibers, and vegan fibers such as cotton, hemp and flax, to make felt. From creating clothing, toys, rugs, and even yurts (huts), felting has prevailed through the ages as a useful and versatile skill.

Kara Kirchner, owner of Karafelts in Bloomington, uses a process called needle felting to create 3-D sculptures. Using a thick piece of upholstery foam as a work surface, she takes a handful of fluffy wool fiber and tightly rolls it. Placing the ball of wool on the work surface, she jabs it rapidly with various gauged felting needles until the fibers in the ball get entangled and form a solid shape that can serve as the project foundation.

To add arms, legs, a head or adornments, smaller balls of rolled fiber can be shaped in the same manner and needle felted to the body. No paint is required. To add color, Kirchner needle felts color into the object. Horse hair can be used for whiskers, and plastic or glass eyes can be added. If a piece calls for thin limbs, she uses a wire frame called an armature tightly wrapped in fiber on which to needle felt the sculpture.

When Kirchner made her first 3D needle felted rabbit sculpture, she immediately knew it was more than just a craft project. “From there,” says Kirchner, “I was hooked.” The Corn Belt Energy member and stay-at-home mom of two girls, ages five and seven, realized this was the ideal creative outlet. Unlike other crafts that might be wet and require immediate completion, needle felting can be stopped and started any time and the raw materials can be easily transported, which is ideal for a busy mom.

Needle felting isn’t hard to learn, but it takes time to develop good technique. Kirchner is self-taught, using online tutorials to improve her technique. She explains, “I’ve kind of developed my own style through the years and am trying to find a balance between realism and my own style.” 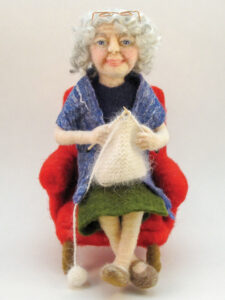 When she began needle felting, Kirchner became overwhelmed with all the possible directions she could take it. She says, “I didn’t know where to put my focus – what I was passionate about.” She eventually found her passion in needle felted doll sculptures. While she still makes art dolls, her inventory for shows primarily includes animals and small ornaments.

Needle felting is an arduous process, with many hours invested in even the smallest sculpture. No artisan can charge enough per hour to be priced competitively. A small fox sculpture that takes Kirchner roughly seven hours to make, sells for around $75. Small pumpkin heads sell for $40. A life-like Abraham Lincoln bust, that took around 40 hours to make, would sell for closer to $1,000.

In four short years, Kirchner has mastered her craft. The quality of her sculptures and recent accolades at juried (professional) shows are evidence of it. At the 2016 Sugar Creek Arts Festival in Normal, she received second place in the Fine Art division. A year later came a first-place award in the Fiber division at the Old Capitol Art Fair in Springfield. Last year, she was honored with a second-place finish in the Fine Art Division at the Spring Bloom Art Festival in Bloomington. Kirchner loves meeting people at the shows and finds great satisfaction when they find a piece that speaks to them.

Kirchner’s needle felted sculptures can be found online under Karafelts at Etsy.com and on Facebook, and under karafeltsart on Instagram. She’ll be back at the Old Capitol Art Fair and other shows later this year. For more information about needle felting, there are many sites and “how-to” videos on YouTube and other areas on the Internet, and in books. 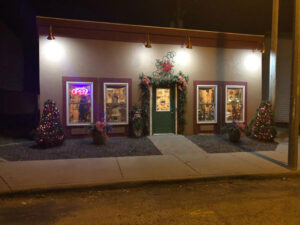 In downtown Farmington, Star Metal Art is living the American dream. What started 10-1/2 years ago as part-time income for owners Sue and George Starcevich, has grown into a full-blown metal design business that has gained popularity within Illinois, and beyond. Getting to this point, however, wasn’t easy. There have been growing pains, doubts and tears along the way.

In the business’s infancy, both Starcevech’s held good full-time jobs and created metal works at night and on weekends. Limited personal time, a fire where the business was once housed that shut them down temporarily, and other challenges along the way, made them question whether they should continue. In July 2014, when the city approached them about moving into their current location on Main Street, they took the leap of faith. After a 37-year career in banking, Sue left to focus solely on the business. In October of that year, the business re-opened.

In the small, but tidy store, the Starcevich’s have made good use of the space. The metal works are tastefully displayed on the walls and shelves, and anywhere there is an open area. Sue is customer-focused, taking time to make every customer feel special, and her banking and computer experience have been instrumental in the business’s success. She runs the business’s day-to-day operations and designs and cuts most of the metal pieces. Using computer software and specialized equipment, many designs are laser-cut from large 14-gauge steel sheets. Much of what the business creates is art from words, and farm, sports and outdoor designs.

Realizing that Farmington, a town of just under 2,500 residents, had a limited market for metal works, learning to use social media to sell the company’s metal art outside the area revolutionized the business. During a vacation from her former banking job, Sue took a chance by listing some items on a Facebook page and purchasing some accompanying sponsor ads. She says, “At the time, we only had 300 followers, and by the end of my vacation, we had 1,500.” Sue’s husband worked second shift and would come home to find her on the computer at 1 a.m. He’d ask what she was doing, and she’d say people were “asking questions or wanting to know stuff.” Sales for products posted on Etsy, an online site where businesses can sell their wares, also took off.

Custom designs have been an important segment of the business both in-house and online. George, who has 30 years’ welding experience, is currently working on some custom trellises. He also cuts and rolls heavier metal to make sturdy fire rings that are secured with rivets. He can use a torch to add color to raw metal pieces, or they can be sent to an outside vendor to be powder-coated in a variety of colors.

Custom orders expanded when, in October of last year, the opportunity arose to create pieces that combined metal with wood. “We started making the wood signs and putting words on them, and it was gangbusters,” says Sue. It also provides work for a close relative who custom cuts and stains the wood.

The future looks bright for the Starcevich’s. Following George’s retirement in a few years, the plan is for the business to support them. They’re looking ahead at new ways to market their products. Sue explains, “We don’t do wholesale. That might be something we could tap into if we knew we could produce it now and get it to them in a timely manner without hurting people coming in [to the store].”

When asked about Star’s target audience, Sue’s reply is “Anybody who wants anything.” It hasn’t been easy, but with hard work, brains and know-how, this small business in Farmington is Illinois proud, and Illinois-made.

Since as far back as the Dark Ages, sorghum panicles, also called broom corn, have been bundled and used as brooms. In the late 1700s, broom corn was brought to the United States, and by the 1860s, Illinois was the leading producer of the crop.

The Newton Broom & Brush Co. opened in Newton in 1914 when the broom corn broom business was booming in the state. At that time, brooms were used to clean every surface, including carpeting. Broom corn was harvested by hand, and timing of the harvest was crucial to producing the highest quality brooms. Through the years, the time-sensitive and labor-intensive nature of harvesting broom corn caused farmers to abandon it as a viable money-making crop.

By the 1960s, broom corn production in Illinois had virtually ceased. Since then, most broom corn used in the country has been imported from Mexico. This, coupled with the shrinking skilled labor force necessary to produce wire wound corn brooms, as well as the development of machine-made plastic brooms, forced many manufacturers to close.

Despite these industry challenges, Newton Broom & Brush Co. operated successfully for many years. However, after changing hands several times and falling on hard times, Alex Leventhal, who owned the Cleveland, Ohio-based Sunshine Broom and Brush Company, purchased the Newton-based company in 1954. It was eventually passed down through the family to Alex’s son, Don, who has been in the broom-making business for 45 years. 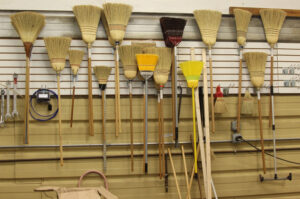 Newton Broom & Brush Co. sells several types of broom corn and synthetic-fiber brooms, dusters, sweepers, mops and brushes, most of which are manufactured there. The most labor-intensive products of them are broom corn brooms. Leventhal says it is challenging to find workers with the skills necessary to do such specialized and demanding work and those who are willing to be trained for it. Today, the Newton Broom & Brush Co. is one of two surviving commercial broom corn manufacturing companies operating in Illinois.

Broom corn brooms are made almost entirely by hand. They are wire-wound, requiring an employee to use a winding machine operated by a foot pedal. A broom handle is inserted into the machine and nailed to the wire. As the handle is rotated, corn that is less uniform in size is used for the inner part of the broom and held in place with wire fed from the machine. To give the broom its shape, offsetting broom corn stems are wound onto the handle. Longer and higher quality stems used for the outside of the broom are then attached to the handle, and all three layers are tightly wound with wire, trimmed and nailed.

The brooms are then dried and sent to a stitching station where a worker inserts the broom head into a sewing machine, which stitches several rows of twine. The thicker the broom, the more rows of twine are necessary. The brooms are then cut, covered with a plastic sheath and boxed for shipment. This entire process requires the skill of three workers.

The Newton-based company depends on sales from an Amazon Internet store, its website and producing select brooms for other broom companies to sell. Newton Broom & Brush Co.’s flagship product, the lightweight broom corn “Kitchenette,” is sold online and in bulk for fundraising events. Leventhal says, “The fundraisers make genuine broom corn brooms available for people who can’t buy them Leventhal doesn’t plan to retire anytime soon. For him, this business is truly a labor of love. Through smart business sense and a keen eye on what drives the market, he’s been able to keep this century-old business running and preserve the centuries-old art of making broom corn brooms.

Levanthal, Kirchner and the Starcevich’s have found ways to use these ancient arts in their own way for their livelihood. Through this, they are preserving their crafts, providing employment in their communities and bringing tax revenue to the state of Illinois. 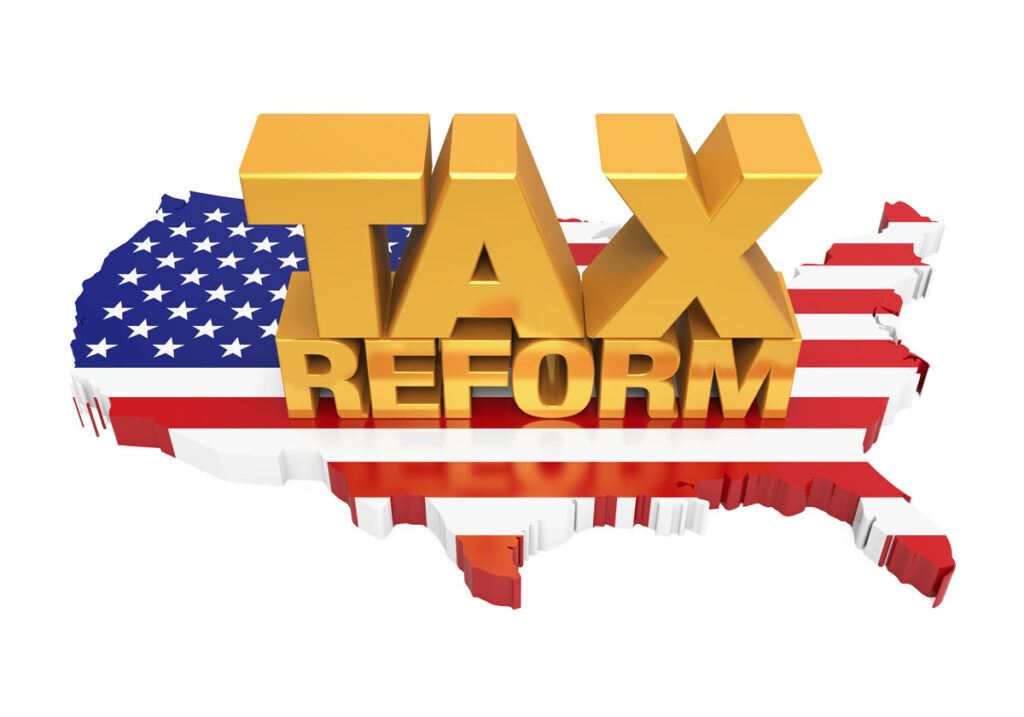 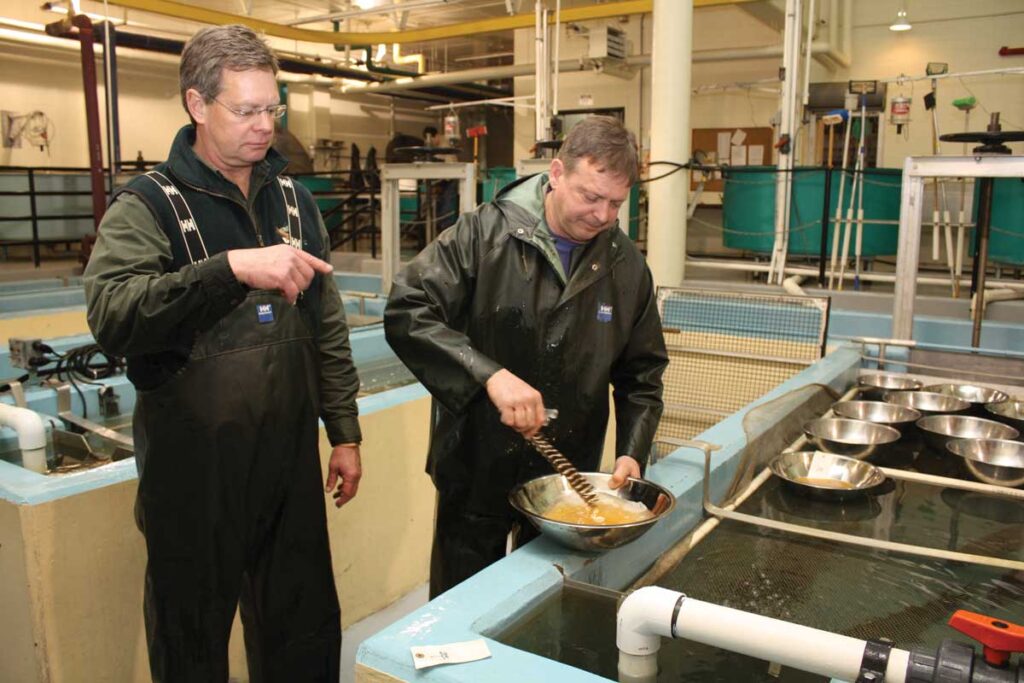