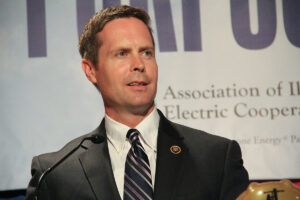 At the Association of Illinois Electric Cooperatives annual ­meeting in Springfield on July 31, U.S. Representative Rodney Davis (R-Taylorville, 13th Congressional District) received the 2015 Illinois Electric Cooperatives’ Public Service Award. The award was made in recog­nition of Rep. Davis’ dedicated public service to all ­citizens of the state of Illinois and for outstanding ­contributions to the rural elec­trification program.

Rep. Davis is a supporter of Illinois electric cooperatives and their rural member-­owners on a wide variety of rural issues. He currently serves on the following committees: Agriculture, Transportation & Infrastructure, and House Administration.

He has been a strong advocate for rural Illinois. For electric cooperatives he has been a great supporter of issues ­including: RUS electric loan program, pension ­legislation, water heater demand response legislation, FEMA reform, the “Waters of the U.S.” ­proposed ­regulation, legis­lation ­requiring Congressional review of EPA existing power plant ­regulations and coal ash legislation.

Rep. Davis, who received electric service from Rural Electric Convenience Cooperative for many years, thanked several of the co-op directors at the meeting for their leader­ship on many rural issues besides rural electric ­cooperative issues.

He said, “Growing up in a small town you learn there are many challenges we face in rural America. We all have the same goal. When you make your ­communities ­better it makes the state ­better and makes our nation ­better. The ­decisions you make in your cooperatives every day are going to be felt by ­generations beyond. These ­decisions are not about us. They are about our children, our ­grandchildren, the next generation and their opportunities that can only be limited by their ­imagination. That is what public service is all about. That is why I’m so honored to receive this award.”