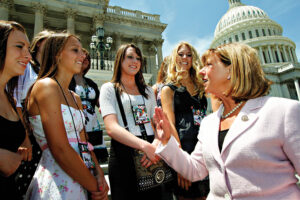 During its Winter Board Meeting on December 3, 2012, the National Rural Electric Cooperative Association Board of Directors announced that U.S. Rep. Jo Ann Emerson (R-Mo.) will assume the role of NRECA CEO effective March 1. Emerson, who will become the fifth CEO in NRECA’s 71-year history, will officially join the ­organization on February 11.

NRECA Board President Mike Guidry of Louisiana says, “Jo Ann Emerson’s background as a member of Congress and a trade association executive-coupled with her extensive knowledge of the issues facing electric cooperatives and rural America-make her eminently qualified to lead NRECA and represent the interests of its members. The respect she has from both sides of the aisle and her proven ability to bridge political and policy divides and find common ground will serve us well.”

Emerson, first elected to the U.S. House in 1996 from Missouri’s 8th Congressional District, most recently served on the House Appropriations Committee and as chairman of the Financial Services and General Government Appropriations Subcommittee, which has oversight of the U.S. Treasury, the Internal Revenue Service and various independent federal ­agencies, including the U.S. Securities and Exchange Commission, the Federal Communications Commission, the General Services Administration and the Small Business Administration. In addition, she has taken a leadership role on agriculture, health care, and government reform issues ­during her congressional career and won recog­nition for her work on energy, ­including being presented with the NRECA Distinguished Service Award in 2006.

Emerson says, “NRECA is committed to the electric cooperatives of this great nation, and works hard every day to improve the quality of life for their consumer-members. I am very honored to join an outstanding organization to work on their behalf.”

Locating broadband services
Building a Better World
Green jobs for sustainable careers
Co-ops cutting costs through innovation
Keeping it simple
What is the most common Valentine’s Day gift?
Remember safety after the storm has passed
A time for co-ops