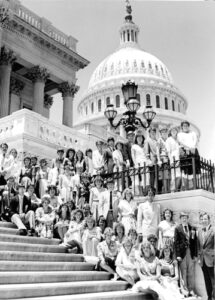 Illinois Rural Electric Youth Tour is turning 55! And oh, what a tour it’s been.

Anyone who’s looked after a group of 16- and 17-year-olds in Washington, D.C., for Youth Tour knows how challenging and physically exhausting it is, not to mention how hot and humid the nation’s capital can be in the middle of June.

But there’s a reason the program has not just endured but thrived for more than half a century—and why people like Kristin Banks and John Freitag stick with it year after year: the students.

“It’s been an honor and a pleasure to work with new groups of students each year,” Kristin Banks says. “It’s so rewarding to see each student grow and discover how they can significantly impact their community through this program. This program truly is changing lives.”

Youth Tour brings together some 1,600 teens from 43 states for a once-in-a-lifetime opportunity culminating in Washington, D.C. Students dance on a boat cruise down the Potomac and see the roots of American history. They learn about electric co-ops and grassroots political advocacy. They live in awfully close quarters for up to a week and are given a small taste of freedom and independence. They sleep a little and talk a lot.

These students become college roommates, professional colleagues and lifelong friends. For some, it’s a fun trip that later brings fond memories. To others, Youth Tour inspires kids to discover the adults they’re going to be.

For those accepted into the Youth Leadership Council (YLC), the experience is even richer. These students – one representative from each participating state – work the congressional action center at the National Rural Electric Cooperative Association’s (NRECA) Annual Meeting. They also participate in a special meeting one month after the Youth Tour to delve more deeply into leadership and cooperative grassroots issues.

Much has changed during the past 55 years since Youth Tour was born, but the one constant has been the students, who never fail to be amazed, inspired, humbled and grateful, according to the faithful electric co-op employees who bring new groups back to Washington every year.

For the chaperones and state coordinators, Youth Tour is an enormous amount of work culminating in just a handful of frantic days each year. Flexibility and being able to roll with the punches are must-haves. But it’s a labor of love for most.

“Rewarding” is a common refrain from those involved in the program, from administrators and coordinators to parents and participants—even the bus drivers who stick with a state year after year.

“I’ve had parents come up to me after the program and say, ‘I don’t know what you did, but you brought back a different kid than you took.’ And for parents to say that is gratifying and humbling,” says Banks.

Senator Lyndon Baines Johnson inspired the Youth Tour when he addressed the 1957 NRECA Annual Meeting in Chicago. Johnson was a longtime advocate of electric co-ops, having lobbied for the creation of Pedernales Electric Cooperative in 1937 as a young politician in Texas. The senator and future president declared, “If one thing comes out of this meeting, it will be sending youngsters to the national capital where they can actually see what the flag stands for and represents.”

With that encouragement, Texas electric co-ops began sending summer interns to work in the senator’s Washington, D.C., office. In 1958, an electric co-op in Iowa sponsored the first group of 34 young people on a week-long study tour of the nation’s capital. Later that same year, another busload went to Washington from Illinois. The idea grew, and other states sent busloads of students throughout the summer. By 1959, the Youth Tour had grown to 130 participants.

In 1964, NRECA began to coordinate joint activities among the state delegations and suggested that co-op representatives from each state arrange to be in Washington, D.C., during Youth Tour week. The first year of the coordinated tour included about 400 teens from 12 states.

The Association of Illinois Electric Cooperatives coordinates the daily planning of all events and sites of interest for the tour which travels via two chartered buses. In the past 55 years, more than 3,000 students representing rural areas and small towns across the state have participated in the program.

If you were part of the youth tour, please feel free to contact Kristin Banks at kbanks@aiec.coop with your stories or what you are now doing. She would love to hear from you!

You can follow the trip each year by visiting the Illinois Youth to Washington Facebook page at https://www.facebook.com/ILYouthToWashington. For more information on the history of the program go to http://aiec.coop/youth-programs/youth-to-washington-tour/