Energy from the ground up 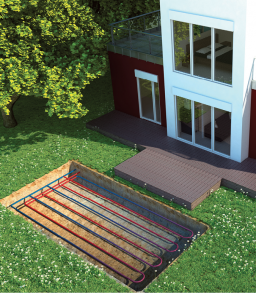 The winter of 2014 was a wake-up call for homeowners facing higher-than-normal heating costs. With the polar vortex came heavy snowfalls and record low temperatures for extended periods. Impacting much of the country, including Illinois, the cost of heating hit many people hard this year. Propane gas, in particular, skyrocketed in price. Some folks paid more than $5 a gallon for LP gas. And in many areas of Illinois, LP was rationed during the extremely cold weather.

The hefty costs of heating and cooling

If you’re concerned about energy prices and the cost of heating and cooling in the future, perhaps it’s time to start looking for new, alternative sources for heating and cooling. Replacing an old gas furnace with a new one will likely provide a modest efficiency upgrade, but fossil fuel furnaces efficiency gains are limited. And they’re still dependent on fossil fuels.

There is ONE viable renewable energy solution. It’s called geothermal and its energy source is the very earth beneath our feet. Because the earth absorbs 50 percent of the sun’s energy – more than 500 times more energy than mankind needs every year – there is an abundant power source in the earth to tap for heating and cooling. Geothermal systems transfer this heat from a home back into the earth during the cooling season and return it to the home from the earth during the heating season. Geothermal is possible because the temperature of the earth at 5 to 6 feet below ground (or deeper) remains relatively constant year-round.

“There are really just two very significant ways that a homeowner can make a major efficiency upgrade. The first is by improving the building envelope, or adding insulation and weather sealing. The second is by installing a geothermal heat pump,” notes John Freitag, Executive Director of the Geothermal Alliance of Illinois and longtime geothermal heat pump advocate. “Because a geothermal system is so efficient, the homeowner usually finds that heating and cooling costs are cut in half … or more. After a winter like we had last year, this is a pretty significant savings.”

Freitag says most Illinois homeowners with geothermal get an incremental payback within 2-5 years. This payback is the length of time it would take to pay back the additional cost of a geothermal system compared to a conventional heating-cooling system.

“Most people find that the energy savings from a geothermal system will more than cover the cost of financing the efficiency upgrade. So geothermal usually provides a positive cash flow from day one,” he says. “But that’s just the beginning. It’s not just the return on investment, but also the comfort, quietness, longevity and environmentally-friendly nature of geothermal.”

Most geothermal systems start with the installation of what’s called a “closed loop” in the ground. There are three types of ground loops. Vertical loops use the least amount of space and are thus often the most practical, and sometimes the only choice for small lots. Horizontal loops are usually more economical, but they also require the most amount of property area. Slinky (coiled) loops can save time and money. They require less area than the standard horizontal loops and are generally more economical than vertical loops. If a well or pond is available, the loop can be installed in the water.

This closed loop is connected to one or more geothermal heat pumps inside the house. In the winter, the fluid circulating through the loop absorbs stored heat from the ground and carries it indoors. The fluid going back into the ground is colder, but it warms as it is pumped through the ground loop. The geothermal heat pumps compress the heat to a higher temperature and distribute it throughout the home. In the summer, the process reverses and heat is exchanged into the ground loop, with cooler fluid coming into the unit.

Geothermal systems are recognized by the U.S. Department of Energy (DOE) as the most energy efficient heating-cooling system of all (saving up to 70 percent on energy bills) and they come with a federal tax incentive credit of 30 percent of total installation costs.

With a geothermal system, there is no direct fossil fuel use (other than the fuel used for generating the electricity), no direct greenhouse gas emissions, few maintenance issues, and because the loop is underground and the heat pumps are located inside the house, the system is not susceptible to weather or storm damage. Plus, geothermal systems are exceptionally quiet in operation.

“A simple way to look at it is this … the geothermal system basically pumps water and blows air. That’s why it is so energy efficient … and inexpensive to operate,” Freitag says.