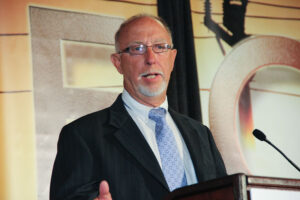 Sen. Forby, a former farmer and businessman and a resident of Benton, received one of this year’s Illinois Electric Cooperatives’ Public Service Awards. Sen. Forby said, “I have the bottom 13 counties of Illinois and down there our biggest issue is jobs. That is mainly what I work on. The co-ops have done an excellent job in my district and they are fantastic to work with. The biggest thing a state legislator can do is listen and when they call, I listen.”

At the Association of Illinois Electric Cooperatives’ Annual Meeting held on August 2 in Springfield, State Senator Gary Forby, D-59th District, received the 2012 Illinois Electric Cooperatives’ Public Service Award. Although he was unable to attend it was announced that State Representative Michael Unes, R-91st District, received the ­second Public Service Award for this year.

The award was made in recognition of Sen. Forby’s outstanding support of the rural electrification program in Illinois. He is also a strong supporter of agriculture and other issues important to rural Illinois. Rep. Unes was ­honored because of his sponsorship of copper theft ­legislation. Copper theft has been increasing and rural electric co-op lines often are the target of copper thieves.

The Association of Illinois Electric Cooperatives salute…
The speed of light(ing)
Change Part II
Bringing a dead lawn back to life
SMART GRID the next greatest thing
A new generation of coal technology
Spot the s, look for the lock