Shimkus concerned about risk management and loans for farmers 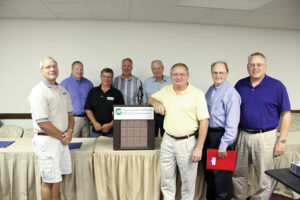 Congressman John Shimkus (R-IL 19) held his Ag Advisory Board ­meeting at the offices of the Association of Illinois Electric Cooperatives in August. He voiced concern about passage of the Farm Bill, drought relief for area farmers and regulations on local community bankers.

Shimkus said, “When the pictures of a national drought are from your district you know it has been a tough year. I’ve been all over my current district and parts of my new congressional district and I think as we talk about the Farm Bill it is time to make the argument to my colleagues that this is why we have a program. It is for years like this. That is why you have an insurance process so farmers can do risk management. I did get to talk to the Speaker of the House yesterday and he understands risk management.

“Another thing when we talk about risk management is loans. There is real concern that the bigger banks are going to get bigger and squeeze out the smaller, local community banks because of rules and ­regulations. I think that is very harmful to rural America. I think it is going to be harmful to our producers. I hope that we can start looking at that too. I’ve always been concerned about the movement to centralize the financial industry into some major banks versus local community banks.”

Picking the right heat pump
Wi-Fi is the FBI here?
Built by the people, for the people
The Association of Illinois Electric Cooperatives salutes …
2012 Culinary Gift Guide
It may be time for geothermal
It’s grow time for trees roots
Protect your family
Historically low energy prices can’t last