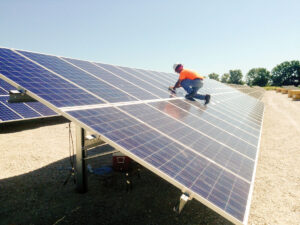 Prairie Power, Inc., a Springfield-based generation and transmission ­cooperative providing wholesale power to ten Illinois electric distribution ­cooperatives, is building two 500 kW solar farms. Each solar farm will be located on approximately five acres and have 2,062 solar panels. Despite heavy rainfall during construction the two projects are on schedule. The two farms are expected to be operational early this fall.

The Spoon River Solar Farm is located in Fulton County along Highway 24 ­approximately three miles northeast of Summum. The Shelby Solar Farm is located in Shelby County along Highway 16 approximately one mile east of the Lake Shelbyville Dam. These two locations were chosen because they were in electric ­cooperative service territories, the land required was available for lease and there were electric ­cooperative power lines nearby for the solar farms to tie into.

The cost of each of the two solar farms will be around $1.6 ­million. Reynolds said building a larger solar facility as opposed to smaller rooftop solar projects has the advantage of lower cost. “While solar energy is still somewhat more expensive than traditional resources such as coal and ­natural gas fueled generation plants, the cost of large scale solar projects has declined substantially over the past ­several years and the panels are becoming more efficient in turning sun light into electricity.”

The Spoon River Solar Farm will also include a learning center where co-op members and the general public can learn more about solar energy.