U of I recipient of federal funding 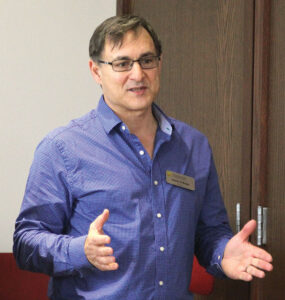 The U.S. Department of Energy’s (DOE) Office of Fossil Energy (FE) and the National Energy Technology Laboratory (NETL) have selected nine projects to receive approximately $6.5 million in federal funding. The University of Illinois is the recipient of $1,073,811 in research funds for large pilot testing of Linde/BASF Advanced Post-Combustion CO2 Capture Technology at a coal-fired power plant.

DOE has supported a range of potentially transfor­mational coal technologies aimed at enabling step-change improvements in coal-­powered systems. Some of these technologies are now ready to ­proceed to the large-scale pilot stage of development.

The University of Illinois, Champaign, project will design, ­construct, and operate an advanced post-combustion carbon dioxide (CO2) capture system at a coal-fired power plant. In Phase I, the University of Illinois will complete a ­feasibility study and select a host site; all in an effort to dramatically reduce CO2 from coal plants.

Illinois has a large interest in the research. Affordable coal generation helps keep Illinois’ electricity rates below the national average. And Illinois is a major coal producer with the fourth largest reserves in the U.S.

Planning for the future
Flesor’s Candy Kitchen
Art, architecture and amusement at Allerton
A (careful) day in the life of a lineworker
Aim for quality when managing a renovation contractor
Don’t take ‘em home!
Cruising for cuisine
Reuse and recycle in the garden this spring
Electricity theft: not worth the risk
The cooperative movement