Voting is your right and responsibility – exercise it 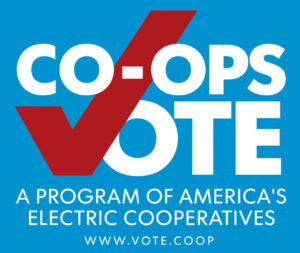 With 42 million members in 47 states, electric cooperatives can provide a powerful voice on national issues that have local impact.

The democratic process is ingrained into the co-op ­business model. Members of electric cooperatives have the opportunity every year to vote for directors to represent them on their local cooperative board of directors, but across the country, citizens often do not exercise that right to vote when it comes to local, state and national elections.

The bipartisan effort seeks to boost voter turnout in areas served by cooperatives and the country as a whole. When residents choose not to vote, they lose the opportunity to communicate their concerns about issues that matter to them, and that’s what the Co-ops Vote initiative is seeking to change. Co-op Votes is an initiative that begins at the local, grassroots level, but it can end up making rural issues a priority at the national level.

The list of eight key issues that electric cooperatives are focusing on getting elected leaders across the country to understand includes:

Additional information about this initiative is available at the Co-ops Vote website, www.vote.coop. The website provides information about elected officials and candidates, the voter registration process, election dates and locations, and background about the eight key issues.