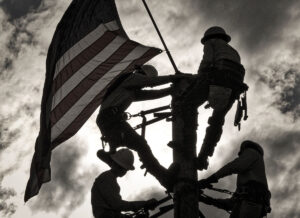 The flag was raised to the top of a pole by hand, in lineman fashion, at the Association of Illinois Electric Cooperative’s 18th Annual Lineman’s Safety Rodeo held in Springfield, Sept. 18. At the rodeo, 14 co-op lineman teams were judged not just on their skill, but their safe practice of those skills. The winning team this year was from SouthEastern Illinois Electric Cooperative and included Ryan Johns, Clayton Gulley, and Austin Lewis.

“We had a couple of rain delays, but all-in-all the 18th Lineman’s Safety Rodeo was a success,” said Mary Zitek, AIEC’s Safety and Education Services Coordinator. “The rodeo was dedicated to the memory of Bob Moss, who was killed in a freak sink hole accident while working an outage for Illinois Electric Cooperative earlier this year. We also raised money in a raffle for the Burn Center here in Springfield and Irby, one of our sponsors, had a raffle for a generator, which raised nearly $500.The funds were matched by Irby to benefit Gerry Kinney, an Illinois cooperative lineman who recently lost both hands in an accident.”

The Lineman’s Safety Rodeo is held on the Chuck West Lineman’s Training Field at Lincoln Land Community College (LLCC). The college hosts a lineman training program coordinated by the AIEC. Courses are designed for new linemen and to help existing electric line personnel improve their work skills in safe and ­efficient ways. Each year at the rodeo, teams of linemen from Illinois electric cooperatives participate in ­competitive events using skills that focus on agility, speed and ­accuracy. While these skills are part of the competition judging, above all the lineman are judged on safe work practices.