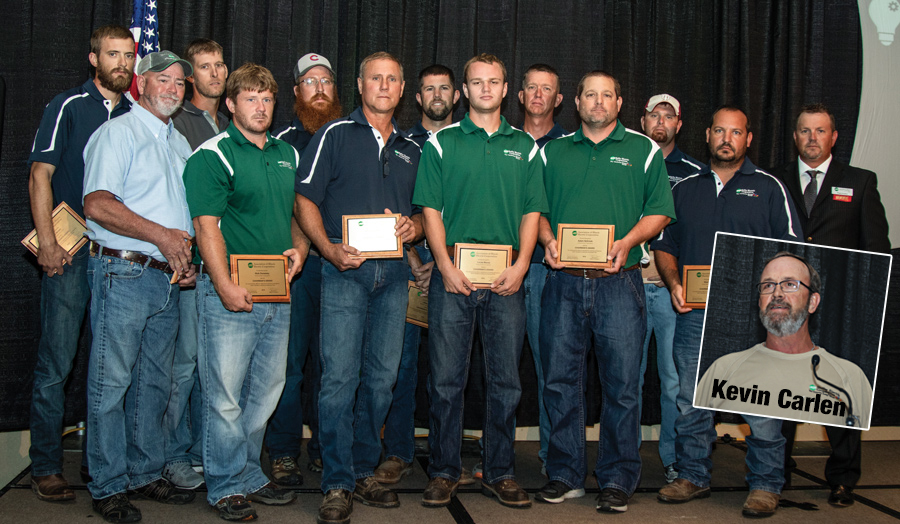 Fourteen individuals received the Association of Illinois Electric Cooperatives’ (AIEC) Chairman’s Award at the AIEC Annual Meeting July 26-27. The Chairman’s Award exists to honor those who exhibit outstanding achievement or effort by an individual or group.

The group was presented the award for their quick action in saving one of their own. During a scheduled hurt man rescue training, Kevin Carlen, Shelby Electric’s forestry line foreman, suffered a heart attack while descending the pole.

His co-workers at Shelby Electric Cooperative and AIEC Safety Instructor Thad France moved him safely from the pole and followed emergency cardiac care procedures learned in safety training using CPR and an AED. The event occurred quickly and within seconds the group sprang into action. Their previous training prepared them for a day like this. “It was the most amazing thing I’ve ever seen in my 24 years as a lineman,” said France. “Every time I yelled to someone to do something, he was already doing it. Everyone did the right thing.”

These efforts revived him and kept him stable enough for emergency personnel to take over treatment and get him to the hospital for surgery. Without the spirit of cooperation and ongoing safety training, Carlen would not have survived. Carlen was in attendance at the meeting to thank his fellow linemen for their quick response.

The employees of Shelby Electric also presented a $545 check to the Illinois Hurt Lineworker Fund which provides AIEC member cooperative lineworkers emergency financial assistance as they deal with catastrophic medical injuries and loss of life. The fund is designed to provide a direct infusion of funds to assist lineworkers and their families when a catastrophe creates a special need. To learn more about the fund go to
illinoishurtlineworkerfund.org.