Once upon a time, burgers at Bill’s Toasty in Taylorville cost only 5 cents apiece. That may no longer be the case, but much else has remained the same. Numerous guest checks with notes from happy customers on the wall attest to this, especially regarding the quality of the food and its atmosphere.

“It’s been 45 years since I’ve had a Bill’s Toasty burger, and it was just as delicious today as it was in 1973. Make that better! Absolutely the best!” –Erick and Tammi, Phoenix, Ariz.

“Like stepping into a time [capsule] and going back to the ’50s—how great to feel like a teenager again.” –Judith, 76

The raves don’t stop there. Guest checks line the walls with messages from people all over the United States, from Virginia and Tennessee to Texas and California. When the wall no longer had room to display them all, owner Candy Scallions and longtime friend and employee Ursula Hoffmann began keeping a scrapbook of them. They say people have visited from “anywhere and everywhere—even the Netherlands.” And it’s all through word of mouth.

That’s impressive for a small diner in Taylorville, with only 10 stools and a couple of 2-seater booths against the wall (though oftentimes it’s standing room only with folks waiting on to-go orders). Bill’s has been in business since the 1930s—in the many decades since, it’s become an institution. 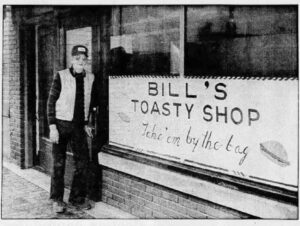 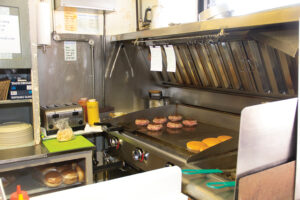 Bill’s Toasty has been serving customers since the 1930s. 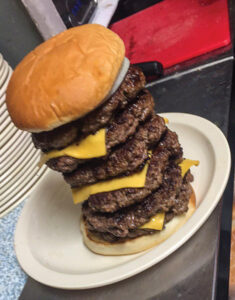 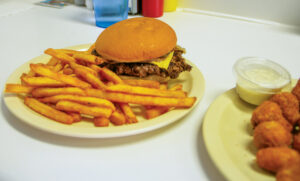 Cheeseburgers are the outright favorite. They are even offered by the bagful. The onion rings have a reputation, too.

While burgers are what Bill’s is known for, there are other customer favorites. The cheddar burger boasts a “skirt” of cheddar cheese, and “The Works” omelet is a breakfast staple. The milkshakes feature flavors beyond traditional chocolate and vanilla; Candy highly recommends the seasonal pumpkin. There are a plethora of fried foods to choose from, of which cheese balls are the hands-down favorite, though the mushrooms are delicious, too.

Candy remembers her dad Calvin taking her to Bill’s as a little girl and propping her up on one of the stools at the counter.

After he retired, Calvin set his sights on Bill’s and bought the place in the early ’80s. “It was the love of dad’s life,” says Candy. After living in Minnesota, Texas and Michigan, she returned to Illinois and started doing the books around 1997, with Ursula’s help. Her mom, baker of “the best pies,” passed away in 1998; her father in 2013.

As memorable as the food are the characters—past and present. Bill’s is open 24 hours a day, seven days a week, and the different shifts bring in a variety of clientele. Some of those customers included country western stars like Boxcar Willie and Charlie Pride, back when the 1,200-seat Nashville North music hall still hosted major acts in Taylorville.

Ursula says some regulars come in like clockwork. “They come in for breakfast and conversation,” she says. “They all know each other… It gives them a place to go.” It’s an older demographic on the morning shift. Candy and Ursula recall when one of their morning regulars didn’t show up, they went looking for him.

The night crowd, though not as wild as they used to be, can prove to be quite entertaining. One customer told Candy that a rather inebriated woman began crying because she couldn’t get fried mayo. She is fine with people coming in to sober up. “We don’t want them to get hurt,” she says of the party crowd.

The staff takes it with a grain of salt. “It’s a lot of pressure being in front of everyone,” Ursula says. Candy adds that “you have to let things roll off your back.”

Sometimes it’s the staff members themselves providing the entertainment. Candy mentions Irene and Elsie, two former employees she describes as “the orneriest women on the face of the earth.” Ursula says people still talk about them. Though Candy says they used language you wouldn’t these days, people liked it—some even came for the show. “There’s always been characters, but those two went down in history,” says Ursula.

Now, with a staff of nine, she wants to keep her family involved so Bill’s will keep on going. “We stay open for the people,” she says. “There’s nothing better than someone walking in, saying ‘I remember…,’ especially when it’s something you didn’t know.”

While she will continue to do the work needed to maintain the building, Candy plans on keeping things the same. “Otherwise,” she says, “it wouldn’t be Bill’s Toasty.” 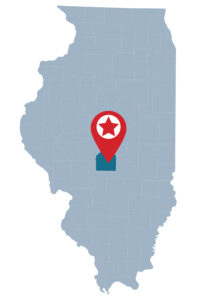