Bunnies and hatchets and whip-purs, oh my!

Eagles, bulldogs and tigers are the three most common high school mascots in the United States. Each sound equally strong. But not all high school mascots in Illinois sound quite as intimidating. Just as you’ve likely heard, “don’t judge a book by its cover,” so it can be said about each anomalous mascot. Many come with interesting stories of their inception.

Barbs: The name of DeKalb’s mascot, Spike the crow, is pretty fierce, but the story behind their mascot is fascinating. In 1873, Joseph Glidden, a farmer from DeKalb, submitted a patent for one of the most common styles of barbed wire fence still used today by farmers and ranchers in the U.S. and abroad. Still manufactured in DeKalb today, the barbed wire and a crow later became the high school’s mascot to honor a piece of the town’s history.

Bunnies: Quite possibly the least vicious high school mascot in Illinois comes with an interesting story. During Fisher High School’s 1933-34 basketball season, two players wore a rabbit’s foot on their belts for good luck. After Fisher won a strong victory during a championship game, a sportswriter from the Champaign News Gazette named the team “Bunny Boys.” The name “Bunnies” still sticks with the team

Cornjerkers: Hoopeston is the “Sweet Corn Capital of the World.” Long before large automated farm machinery, harvesting sweet corn off the stalk was known as “corn jerking.” Hoopeston High School buses were often late for games because athletes “corn jerked” after school. In 1920, a sportswriter gave the team
the name “Cornjerkers,” a joke that later became their team name.

Green Wave: Most people may hear this name and misinterpret it as a green ocean wave, but to the Mattoon farming community, this mascot embodies who they are. “Green Wave” represents the waves of corn blowing in the wind surrounding this agriculturally-driven town. “Green Wave” shows how farmers are tough and hardworking, just like Mattoon’s athletes. 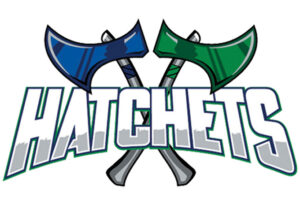 Hatchets: The two small town high schools of Stewardson-Strasburg and Windsor recently chose this to be the mascot of the newly-consolidated sports team called “WSS.” The Windsor Blue Devils and the Stew-Stras Comets decided to choose a mascot that meant something to both schools. In 1960, the two schools played each other for homecoming and the winning team won a hatchet. Ever since, the honorable hatchet was given to the team who won the homecoming game. In order to “bury the hatchet” once and for all, and forget the rivalry the two schools had carried since the 1940s, in 2015 the newly-consolidated sports team chose the “Hatchets” as the mascot to symbolize WSS.

Midgets: Freeburg’s team was “short but mighty” in 1934. With the tallest basketball player at a mere 5-feet, 10-inches tall, playing center, this expeditious team was quite successful despite its lack of stature. During the 1934-35 season, Freeburg won a neck-to-neck game to break the three-year long winning streak of Dupo. A local newspaper sportswriter referred to the team by the name “Midgets,” which the high school has been loyal to ever since.

Orphans: In the 1940s, Centralia High School athletics were known as the Cardinals. One night after a game, a sportswriter noticed their tattered uniforms and said they resembled a bunch of orphans, but sure could play basketball. The name caught on and by 1944 Centralia’s official mascot was the Orphans. In the 1970s, when Centralia started girls’ sports, it was only fitting to name their team the Orphan Annies.

Wooden Shoes: Over 150 years ago, a German immigrant came to the town of Teutopolis making and selling shoes out of wood. When the school’s first basketball coach arrived, he was presented a pair of wooden shoes that were painted and used as trophies at the homecoming games vs. Neoga. After wooden shoes were no longer worn, this town decided to keep the tradition alive and call its mascot the “Wooden Shoes.”

Stories about the naming of mascots abound across the United States. Connecticut has the Winged Beavers, Idaho has the Maniacs, and Minnesota has the Awesome Blossoms. Although the naming of some mascots, such as the Illinois Valley Central High School Grey Ghosts, remains a mystery, many others stories are told with pride across Illinois
All logos were used with permission of the schools.