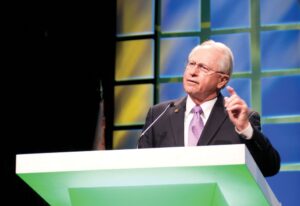 “NRECA and its member electric cooperatives are extremely disappointed to learn that the Obama Administration, in a New Source Performance Standard issued today by the EPA, has jettisoned American coal from the President’s ‘all-of-the-above’ energy strategy.

“Because commercially viable carbon capture and storage technology is still years away, the rules issued today by the EPA have the practical effect of outlawing coal as a fuel source for the next generation of power plants. Alternatively, America’s electric cooperatives support an energy policy that maximizes energy efficiency and truly embraces all domestic fuels: nuclear, natural gas, renewable and coal.

“Politicians cannot have it both ways. Our nation can’t embrace the concept of energy independence and at the same time turn our backs on America’s most abundant domestic fuel source (coal).”