SIPC reduces costs, holds base rate even in 2011 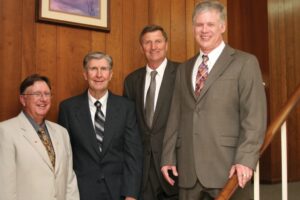 During SIPC's Annual Meeting in March, the following men were re-elected as board officers. They are (l to r) Secretary-Treasurer James Scherrer of Ridgway, Vice Chairman Joe Voss of Carlyle and Chairman Richard Liefer of Red Bud, along with Scott Ramsey, SIPC President and General Manager.

organization’s financial condition and reductions in power cost during the power cooperative’s Annual Meeting of Members held in March. SIPC was able to hold base rates even for 2011.

“Optimism began to grow in 2011 with SIPC achieving excellent reliability at the Marion coal and gas-fired plants. Additionally, while loads from most of the SIPC membership ranged from 1 to 7 percent below budget, the station-service load required for Prairie State through member Tri-County contributed to year-end margins,” reported President and General Manager, Scott Ramsey.

“SIPC also saved approximately $700,000 by purchasing an abandoned utility line which still had good life in it,” said Ramsey. “The line was connected into the new SIPC line sections as part of a new project for an SIPC members’ substation.”

Sales to the seven distribution co-op members fell by 64 million kWh or 3 percent due to the mild winter and slow economy. On Jan. 31, 2013, SIPC will begin selling power to Norris Electric Cooperative, and its load will add 400,000 megawatt-hours annually.

Chairman Richard Liefer said investing with other electric cooperatives and municipal utilities in Prairie State Energy Campus was a huge step for the co-op. “This investment into PSGC’s future is once again leading the charge for growth of our co-op.”