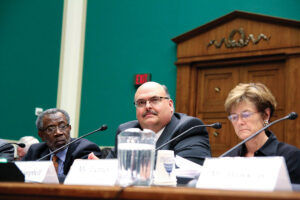 Low-income people in rural America will bear the brunt of ­federal limits on carbon dioxide emissions from coal-based electric generation, Tony Campbell, president and CEO of East Kentucky Power Cooperative (EKPC), told Congress. Campbell ­earlier in his career was an employee of Corn Belt Energy in Bloomington, Ill. The EPA is ­preparing to ­propose carbon ­dioxide standards for existing power plants in June 2014.

“East Kentucky Power is very worried about the ­supply of electricity to its rural cooperative members and its cost,” Campbell told the House Energy and Power Subcommittee Nov. 14.

EKPC has invested nearly $1 billion in pollution control technology to curb emissions of sulfur dioxide and nitrogen oxides from its three existing coal plants and spent another $1 billion to build two coal units with state of the art emission reduction equipment. But Campbell said there is a current lack of commercially available technology to control a power plant’s carbon emissions. EKPC would have to convert these units to natural gas, essentially wasting the extensive capital investments that have been made to lower pollutants.

Campbell said he supported draft legislation from subcommittee Chairman Ed Whitfield, R-Ky., and Sen. Joe Manchin, D-W.Va. The proposed bill would not allow EPA rules in this area to take effect unless Congress enacts a law specifying an effective date. To obtain that date, EPA must submit a report to Congress on the economic impacts of the rule, including how electricity ratepayers may be affected.

“This bipartisan bill is badly needed to ensure EPA does not promulgate a rule that jeopardizes the country’s energy future, puts electricity reliability at risk, and severely harms the economy,” Campbell said.

You may not be able to testify before Congress like Campbell did, but you can voice your concerns about the impact of EPA rules on energy reliability and cost. Raise your voice through the Cooperative Action Network at www.action.coop. Tell the EPA we need an all-of-the-above energy strategy.