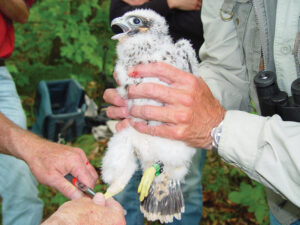 A slow start to spring hasn’t stopped the annual return of Peregrine falcons to the Coulee Region and Dairyland Power’s ­nesting boxes. Mating pairs of falcons at both Alma and Genoa Site nesting boxes are incubating a full clutch of eggs. Fledging of the chicks will likely occur in late June or early July.

Cameras are installed at both the Alma and Genoa power plant ­locations to capture “real time” online bird watching at the nesting boxes. Click on the Bird Cam on the bottom left side of the home page at www.dairynet.com for images of the ­falcons’ 2013 nesting season.

Dairyland has been fostering the return of the Peregrine falcon to its natural territory along the Upper Mississippi since the 1990s. Nesting boxes were installed hundreds of feet up the stacks at Dairyland’s Alma and Genoa generating stations, and in 1997, a pair of Peregrine falcons produced chicks, marking the first successful Peregrine hatch in western Wisconsin in 25 years. Since then, 85 chicks have fledged from Dairyland nesting sites.

In recent years, another major milestone in the Peregrine program has been reached, as the “power plant birds” have chosen to nest on a natural cliff dwelling near Alma. “The first time that power plant nesters ­relocated to the wild and successfully produced offspring was in 2007. They have chosen the cliff dwelling two more times since then, which is a thrill to witness,” said Brad Foss, Dairyland Senior Environmental Biologist.

How to help after a disaster
Jo-Carroll Energy, Farmers Mutual Electric...
Farmer’s markets growing in Illinois
Lawmakers back co-ops on water heater rule
290th birthday of the Illinois National Guard