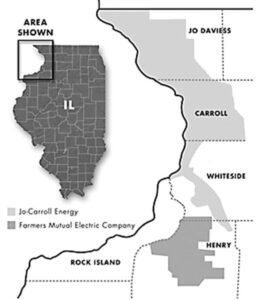 The newly joined system held its first annual meeting on April 14, following some three years of ­cooperative work leading up to the merger. After initial discussions in May 2010, the two co-ops sought input from ­members, ­negotiated with a municipal utility adjacent to Farmers Mutual’s territory and worked to refinance debt for Farmers Mutual in order for the joined entity to remain a 100-percent National Rural Utilities Cooperative Finance Corp. borrower. This means none of its debt is owed to the USDA Rural Utilities Service, the former Rural Electrification Administration (REA).

“This was a big win for both co-ops,” Jo-Carroll President and CEO Michael Hastings said. “We’ll be able to spread ­system costs over more sales, gain access to three power suppliers and roll out additional ­benefits to new members pretty quickly.”

Jo-Carroll is in its third year of a four-year rollout of automated ­metering infrastructure; the ­former Farmers Mutual system will be upgraded this spring and summer. Members also will benefit from an improved billing system and Jo-Carroll’s 25-year capital credits cycle.

“It says a lot that the Farmers’ board of directors made this move for the benefit of their members,” Hastings said. “Our respective boards of ­directors agreed to a revised makeup that will provide former Farmers Mutual ­members with wider representation over six years following the merger.”

Dairyland Power’s Peregrine falcon restoration...
How to help after a disaster
Farmer’s markets growing in Illinois
Lawmakers back co-ops on water heater rule
290th birthday of the Illinois National Guard