Veteran owned and operated Effing Brew Company in Effingham may be best known for its brews but offers much more. Owners Aric Cornell, a Norris Electric Cooperative member, and his cousin, Chad Eirhart, learned the art of brewing at home and translated it into a new business known for its crafted brews and burgers.

Originally planning to open a taproom, their vision rapidly changed when their current building suddenly became available the week they planned to sign on another location.

“It’s a smaller space,” says Aric, “but there was an existing kitchen, and it had all the space we needed for our brewing equipment and a nice seating area. The location downtown is perfect.”

According to Aric, it is the only brewery within a 70-mile radius.

The business just celebrated its fourth anniversary in March and Aric admits it’s been a rough four years due to COVID-19. They did curbside and carryout business, and when the county opened up, so did they.

“We were shocked how good the people in town were to us and they treated the waitresses really well,” he explains. “They tipped well over the top.”

The business has served food from its opening, and the menu has evolved. Originally three pages, it was shaved down during the pandemic, and when they re-opened to inside business, they kept it the same size. Keeping the number of menu items manageable requires fewer employees to handle making menu items and less bumping into each other in the kitchen. With its late-night hours, Effing Brew Company has around 15 employees. Aric says having a small number helps keep the payroll manageable and tight with minimum wage continually rising.

The pulled pork and baby back ribs are smoked in house and all meat is locally sourced from Nuxoll’s in Effingham. Burgers are handmade as are the sauces and toppings. Aric says he tries to buy everything local.

He encourages staff to come up with ideas for daily specials and, if it’s a good seller, it may make it onto the menu. “It’s all pretty organic,” he says. “Throw it at the wall and see what sticks.” 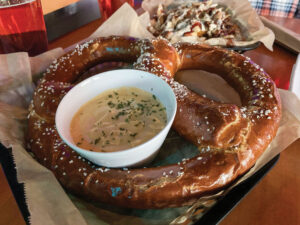 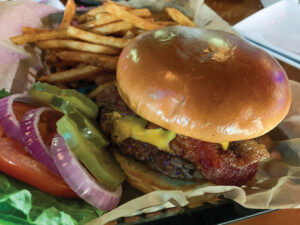 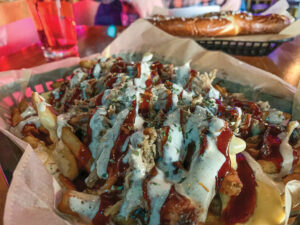 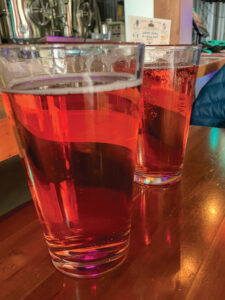 One of Effing Brew’s original drafts

Customer favorites beyond burgers include the Loaded Pulled Pork Fries, pulled pork sandwich and wings, which come wet with a sauce of your choice or with a dry rub. The giant pretzel with beer cheese lives up to its name – it’s dinner plate size. Entrees include the baby back ribs, fish and chips and an Effing Mac and Spice bowl of three cheese mac and cheese topped with a choice of boneless wings tossed in Nashville sauce or pulled pork.

If you have a sweet tooth, ask the waitress about the daily special or check out the dessert board. Some items include salted caramel pretzel bread pudding, bread pudding with caramel bourbon sauce, chocolate peanut butter pie, chocolate cobbler with ice cream and fudge banana cream pie.

Currently, Effing Brew has 10 original drafts, and upward of 15 at times. Due to supply issues, they couldn’t get grain for almost a month and were behind. At the time of this interview, they had grain but no hops. Once those arrive, Chad and Aric should have everything needed to get draft selections back up to 15. 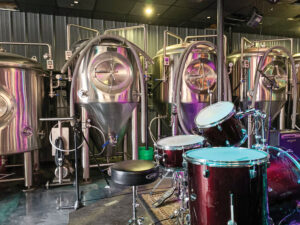 They started with six or seven original brews that have become staples, and it has grown from there. Now and then they do one batch runs but try to stay consistent with what they brew. They offer a variety of light to dark and mild to very hoppy. Aric says Effingham is a light beer town, so they also carry domestics and have a liquor selection.

Above the U-shaped bar hangs row upon row of mugs – around 260 of them. Patrons can purchase a mug with their name on the bottom and it’s available each time they return. The mugs hold a couple of ounces more than the typical glass.

Wednesdays are open mic nights, and on Thursdays they have trivia and/or karaoke, sometimes both. Friday nights are live music and Saturdays either a live event, music, trivia or other acts including comedy. On Sundays, bar Bingo is free for patrons along with prizes.

The site includes a separate lounge, arcade games and darts, and outside patio areas in a popular area of downtown Effingham.

Follow Effing Brew Company on Facebook for daily food and drink specials along with updates on live entertainment. 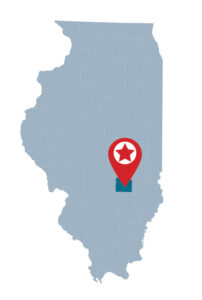