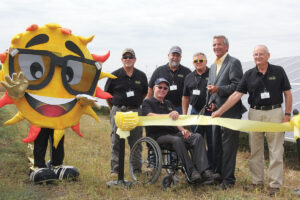 EnerStar Electric Cooperative unveiled its new solar program thanks to a collaboration with Wabash Valley Power Association (WVPA), the co-op’s wholesale power supplier. The new Co-op Solar program is part of a larger-scale local solar program from WVPA. It consists of five solar arrays located in Illinois, Missouri and Indiana and will generate up to 1.7 MW of renewable energy.

EnerStar CEO Mike Clark said, “Our new program allows members the opportunity to purchase solar energy from a cooperative-­maintained facility, eliminating individual ­concerns such as shaded roofs, maintenance and landlord restrictions.” He added that those who rent their homes will also have an opportunity to participate.

“Spreading the arrays out over a three-state geography gives members the best opportunity for capturing the most sun due to weather diversity, and allows the arrays to produce the most electricity collectively,” stated Andrew Horstman, project manager for WVPA. “It may be raining on the arrays in Indiana, but the sun may be shining in Illinois or Missouri.”

The Illinois array is adjacent to the EnerStar Electric headquarters in Paris.

Efficient holiday lighting options
Tips for making your Thanksgiving dinner safer
How communication systems will help save energy
Rural economic development
Bringing outdoor plants inside for the winter
Switch things up with stylish, efficient lighting for your home
Prairie State bowhunting
Homegrown by Heroes
From the sands of Iwo Jima
High-Energy Jobs