Where can you find 815,000 people, 10,000 farm animals and all kinds of food on sticks? It’s a fair question. Really, it is. The season is set to begin and attendance is expected to remain high, having increased steadily for the last eight or nine years.

In 1853 the first four-day Illinois State Fair took place in Springfield. Until 1894, various cities across the state would host the annual event, but it eventually took up permanent residence in Springfield on 156 acres of land.The Exposition building, the first brick structure erected on the grounds was laid on July 4, 1894. Families have been making Springfield an annual destination ever since, with attendance growing every year.

It’s a Midwest iconic venture, according to Amy Bliefnick, Manager of the event. She says some people just think of the fair as carnival rides and entertainment, but it is so much more in that it stands for “good, strong middle class values.”

Bliefnick speaks from her own childhood experience. She and her siblings, who number seven kids in total, started going to the Decatur fair with their father when Bliefnick was less than 10 years old. She is now serving in her 8th year as the Illinois State Fair Manager.

“It’s a pleasure for me,” she says, noting a favorite sight.

“One is seeing a family walking hand in hand, eating corn dogs and just enjoying the fair.”

Of course, the Illinois State Fair has its own unique features. It’s 366 acres with 171 buildings and a slant toward agriculture. In addition, there is always high-profile entertainment and don’t forget the butter cow. She’s been around since 1935. Each year an artist carefully carves out an elaborate full-sized model of a cow in its natural habitat. It’s a fair favorite.

Bliefnick encourages families to visit the fair, saying so many things are free. 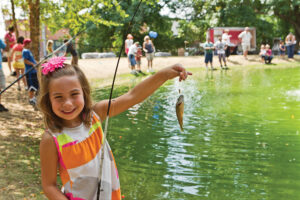 “We maximize the quality of the event while keeping it affordable for families,” she says.

Unlike many states, Illinois lays claim to yet another State Fair, this one being in Du Quoin. It, too, draws many patrons – between 350,000 and 370,000 annually.

This fair was established back in the ’30s when W.R. Hayes, the owner of Du Quoin Coca Cola Bottling Company and Perfection Ice Cream ventured out to the World’s Fair in St. Louis. When he returned, he had decided to be a showman. As the story goes, Hayes bought the Old Black Gold Strip Mine adjacent to his 30-acre fairground tract and turned it into a State Fair patterned after Calumet Farms in Ky. From there he developed horse racing at the grounds, owning some of his own and winning what is known in horse racing as the Hambletonian and the Little Brown Jug. Both horses who won the races are buried in the infield of the track.

Today, horse racing is still part of the draw in Du Quoin, which serves as a destination for many southern Illinois residents. While Hayes started the fair in 1939 and it was privately owned for many years, the state of Illinois purchased it in 1986.

The 1,400-acre fair, which features a lake and trails, has been said to be one of the most beautiful fairgrounds in the United States, comparable only to one in Albuquerque, N.M. And it is home to some event 365 days a year, says Assistant Manager Norman Hill. Some of those events include the Monster Truck Show, auto racing, motorcycle racing, equine shows and more.

“It’s part of our culture down here.”

Take me out to the fairgrounds 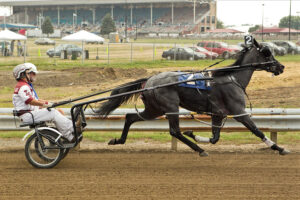 A song originally recorded by Edward Meeker in 1908 and made famous by the late Cubs icon Harry Cary, was all about baseball, a favorite American pastime. But the lyrics of the catchy tune could easily transcend time and evolve into another Midwest much-loved event – the county fair.

The numbers speak for themselves. In 2011, out of 104 county fairs in Illinois (there are 102 counties, some have more than one fair, others have none) a reported 2,552,906 people attended, says Charlyn Fargo, Bureau Chief of County Fairs and Horse Racing. That mega number includes many cooperative members.

Similar numbers are expected this year, possibly more, as residents continue to spend their vacation dollars closer to home.

Local fairs are funded in part by the state, but are heavily supported by counties and their businesses/sponsors. Members can visit the website: http://www.agr.state.il.us/fair/countyfairssched.php for a complete listing of fairs and dates.