Fishing for an Asian carp solution 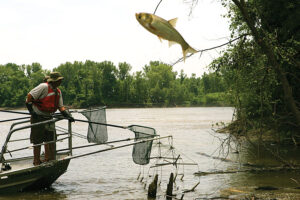 Asian carp were introduced to America in 1972 to combat algae problems in the fish farms of Arkansas, but since then the monstrous fish has found its way up river systems to Northern states like Illinois and Minnesota. Biologists are trying to prevent the fish from entering Lake Michigan.

Recently the U.S. Army Corps of Engineers was asked to come up with a technological solution to the ­problem. One of the most talked about ­solutions is to ­implement barriers in the canal systems of the Chicago area and permanently separate Lake Michigan’s waters. This might cost upwards of $18 billion and take up to 25 years to complete. While still being a necessary option to consider, it would cause con­siderable economic impact to the region’s ­shipping industry.

The country of Belize has a ­similar problem with the invasive lionfish. They have spread throughout the Caribbean Sea since the 1980s, and were first spotted on the Belize Barrier Reef in 2008. The lionfish is an incredibly destructive fish to the reef, having virtually no predators.

What Belize, and notably the Belize Lionfish Project, has done to combat this invasion is set up a commercial fishing industry targeting the lionfish. The lionfish, like the Asian carp, is a tasty fish, with a sizeable market for it throughout Central America and the U.S. This approach has helped the overfished conch and lobster populations and people are actively reducing the lionfish population.

By focusing on attacking the lionfish population through ­fishing, Belize has created jobs, a food market, a ­natural species protection program and has been able to waste minimal time and money doing so. In both Belize and the U.S., it would be impossible to completely fish these species to extinction, but targeted fishing can certainly reduce their numbers and help halt their ­expansion. It would also buy more time to hash-out a full solution to save the Great Lakes from this invasion.